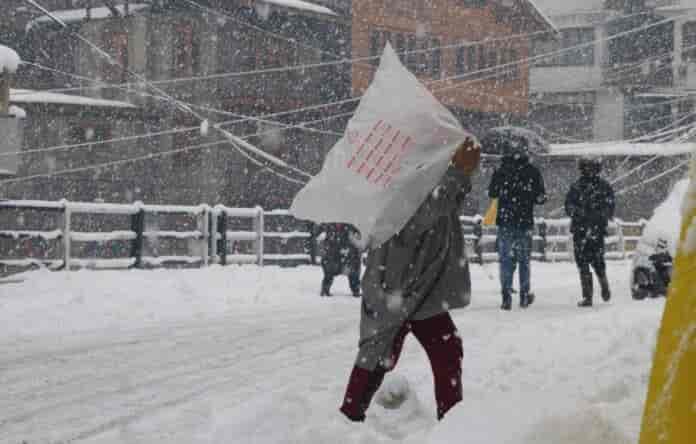 Srinagar: As minimum temperature plummeted again in Kashmir, the weatherman on Thursday predicted snowfall again across J-K from tomorrow (Friday) evening, saying that the night temperature will start increasing from tomorrow.

Deputy Director Meteorological department (MeT), Mukhtar Ahmad said that the light to moderate snowfall would occur in plains of Kashmir from Friday evening.

He said that there is a possibility of moderate to heavy snowfall in the higher reaches of Shopian, Doda and other adjacent districts.

“As per the forecast, the plains in Kashmir would receive light to moderate snowfall from Friday evening while the rains with thunderstorm would occur in Jammu region from tomorrow evening as well,” he said.

Ahmad further informed that from 23 January (Saturday) evening, the weather would start gradually improving, adding that the weather conditions would improve on 24 January (Sunday) afternoon.

Asked about the dip in minimum temperature, the Deputy Director MeT said that the night temperature would start increasing from tomorrow as well, adding that it will go up to four degrees.

He, however, added that the maximum temperature would go down and would settle close to 4 degree Celsius.

Pertinently, the MeT had informed that another Western Disturbance (WD) would affect J-K and Kargil district from 22 January evening to 25 January afternoon.

“Another WD most likely to affect J-K and Kargil district during 22nd (Eve.) to 25th (F/N). This will give Fairly widespread to Widespread light to moderate snowfall /rain in plains of Jmu with main activity on 24th. This system is weaker than the previous one,” Meteorological Centre Srinagar had tweeted.

Meanwhile, the night chill continued across Kashmir with Srinagar, summer capital of Jammu and Kashmir recording temperature of minus 7.0 degree Celsius last night, which recorded minus 6.0 degree Celsius on previous night.

The cold wave conditions persisted in Kashmir from last over two weeks. Srinagar during the period surpassed the three-decade old record when the mercury settled at minus 8.4 degree Celsius last week.

The ongoing forty-day harshest winter period called Chilla-i-Kalaan is all set to end on 31 January. (KNO)