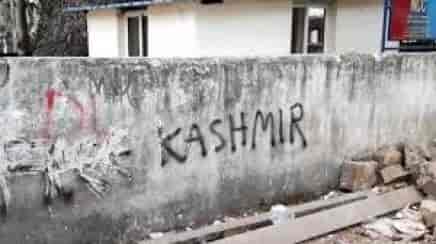 “Free Kashmir” graffiti has surfaced in Karnataka with the slogan seen on the compound wall of a defence enclave colony at Shivajinagar area pf Bangalore.

The graffiti was erased by painting over it, they said.

Deputy Commissioner of Police (East) S D Sharanappa said a case has been registered in this regard, investigation was on and the culprits would soon be nabbed.

The case has been registered under the ‘Karnataka Open Places (Prevention of Disfigurement) Act.’

“The graffiti came to our notice this morning, so we suspect it to be a recent activity.

We are collecting information on CCTV cameras at the spot and en route and eyewitness, if any,” he added.

Last month graffiti had appeared overnight on the shutters of some shops and walls on Church Street here against Prime Minister Narendra Modi, CAA and NRC.

A 43-year old man was on Monday arrested and slapped with sedition charges after he allegedly raised pro-Pakistan slogans in front of the mini Vidhan Saudha at Kundapur in neighbouring Udupi district in Karnataka, police said.

The man, said to be mentally unstable, came in front of the mini Vidhan Soudha (a complex housing government offices) at around 10 am and shouted Pakistan Zindabad several times.

Then he moved on to the corridor and continued shouting the slogan, police said.

A video of the incident recorded by locals became viral within minutes.

On being alerted by locals, police personnel reached the spot and arrested the man.

Police said they registered a first information report (FIR) based on a complaint lodged by Kundapur tahsildar and he has been booked under sedition charge.