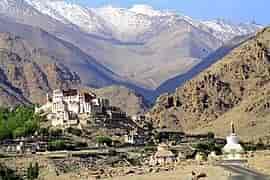 Four tourists from Delhi and UP were killed after the Jeep they were traveling in skidded off the road near Khardungla Pass and fell into 150 feet gorge.

Three tourists from Delhi and one from UP were on board when the mishap occurred.

The Thar Jeep that skidded off the road near Khardungla Pass in Ladakh is still untraceable, police said on Wednesday.

Station House Officer Nubra Stenzin said that the condition of the road had become slippery due to snowfall on Tuesday. “Efforts are on to trace the vehicle,” he said adding that an FIR vide number 18/22 under sections 379, 337, and 304A already stands registered at police station Nubra in this regard.

The police officer said that all four bodies were airlifted to their native states. He identified the deceased as Muhammad Feroz, Reyaz Ahmed and Azam Khan, all residents of New Delhi and Zeeshan Toufeeq of Muradabad UP. (KNT)