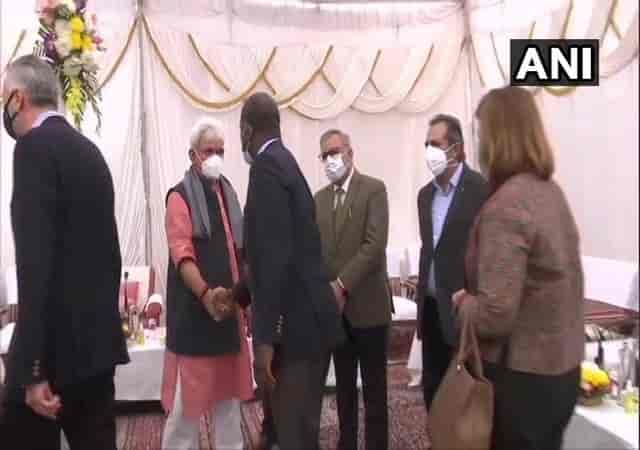 The group of foreign envoys met Lieutenant Governor Manoj Sinha on Thursday at Raj Bhavan in Jammu on the second day of their visit to Jammu and Kashmir, reported Asian News International (ANI).

The delegation led by Ugo Astuto, an EU ambassador, arrived in Kashmir yesterday on a two-day visit and is scheduled to meet government-picked delegations. This is the third visit of foreign envoys since the limited-autonomy of the erstwhile state was abrogated in August 2019.

The diplomats also met the Chief Justice of J-K High Court, Pankaj Mittal, and were briefed by the J-K Police in Srinagar about the various programmes including community engagements and counter-radicalisation.

Quoting the sources ANI reported that the other issues discussed in the meeting were post-August 2019 – “no loss of life in Special Forces’ actions, marked reduction in stone throwing, peacefuly conducted District Development Council (DDC) elections, initiatives of citizen connect, and outreach to the public, 44 Army goodwill schools having 10,000 students in Jammu and Kashmir and Ladakh, assistance to the population of far-flung areas, glimpses of tourism, culture, and achievements of Kashmiri people”.

The delegation interacted with representatives of civil society and the government in Srinagar on Wednesday.

Previous articleIPL 2021: Chris Morris becomes the most expensive player ever
Next articleKashmir highway to remain shut on Friday