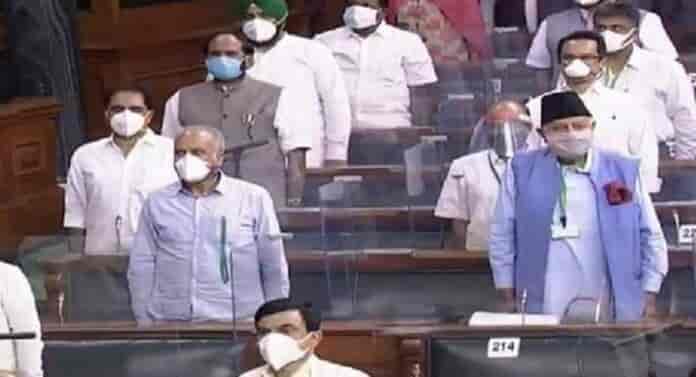 National Conference President Farooq Abdullah on Monday attended the Monsoon Session of Parliament for the first time after a gap of more than a year since the abrogation of Article 370 in Jammu and Kashmir, reported IANS.

Mr. Abdullah was among the various Jammu and Kashmir leaders who were put under pre-emptive detention in the erstwhile state after the Centre on 5 August 2019 abrogated Article 370 which gave special status to the region and clamped down.

Mr. Abdullah’s presence is also likely to bring focus back to Peoples Democratic Party president Mehbooba Mufti’s continued detention. While most of the mainstream political leaders from Jammu and Kashmir have been released, including Mr. Abdullah and his son Omar Abdullah, on 12 March and 24 March 2020, Ms. Mufti continues to be held under the Public Safety Act (PSA).

He was welcomed by senior leaders, including Congress’ Shashi Tharoor and Manish Tewari, NCP’s Supriya Sule, DMK’s A. Raja and Muthuvel Karunanidhi Kanimozhi and All India Majlis-e-Ittehadul Muslimeen (AIMIM) President Asaduddin Owaisi in the Lok Sabha chamber where he was sitting at his designated seat in the second row of opposition benches.

During the debate on the revocation of Article 370 in last year’s Winter Session, several opposition leaders had demanded that Mr. Abdullah, a seasoned parliamentarian, be allowed to attend Parliament. Mr. Abdullah had then spoken to the media in an emotional interview in Srinagar, saying he had to break the door of his house to come out of detention and had rejected Union Home Minister Amit Shah’s claim that he was free to move.

Farooq Abdullah was elected to the Rajya Sabha in 2002 from Jammu and Kashmir and re-elected in 2009. He resigned from the Rajya Sabha in May 2009 and won a seat in the Lok Sabha from Srinagar. He joined the United Progressive Alliance government as a Cabinet Minister of New and Renewable Energy. Mr. Abdullah’s presence will boost opposition’s support when it will hit out at the Centre on various issues during the Monsoon Session which started on Monday and will be held till October 1 amid the coronavirus pandemic.

The last parliamentary session was cut short on March 25 following the spread of the deadly Covid-19 disease. The government has decided to do away with the Question Hour and instead only written replies will be given in the Monsoon Session which will hold 36 sittings — 16 each for both the Lok Sabha and the Rajya Sabha — without Saturday and Sunday break. (Inputs from agencies)