“Dedicate win to my Kashmiri brothers”: Pak fighter after knocking out Indian counterpart 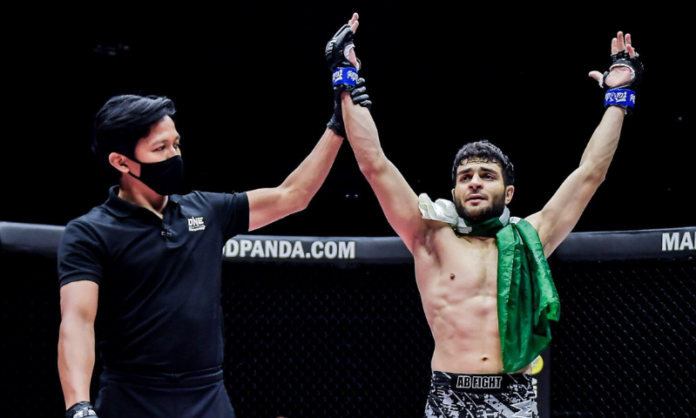 Pakistan’s Ahmed Mujtaba aka Wolverine who defeated India’s Rahul Raju aka The Kerala Krusher has dedicated his win to his ‘Kashmiri brothers.’

Mujtaba said he had “fulfilled my promise” to win the fight, dedicating it to his Kashmiri brethren, Dawn newspaper reported.

“I dedicate this fight to all my Kashmiri brothers, Kashmiri people, and the soldiers of the Pakistan Army, to my people and my fans around the world. God willing, we will continue to win and continue to wave Pakistan’s flag.”

He defeated his Indian counterpart in only 56 seconds in the first round of the mixed martial arts (MMA) competition ONE Championship at the Singapore Indoor Stadium on Friday.

According to a report on the championship’s website, Mujtaba landed the first blow shortly after the athletes touched gloves as he delivered a well-aimed kick on Raju’s lead leg. Without wasting any time, he came in again, hoping to land a punch but Raju deflected it.

The Kerala Krusher then bounced back, hoping to regain momentum but Mujtaba disrupted any such plan by landing another kick. Raju again “came forward with a pawing jab and then a wild overhand right” but Mujtaba blocked it and backed away.

The two men circled each other for the next few seconds simultaneously landing strongside roundhouse kicks to the legs. Pakistan’s Wolverine tried to keep up the pressure on the Indian athlete with a three-piece boxing combo which was deflected by Raju.

After the failed attempt, Mujtaba circled back to the centre to reset himself. Seeing this as an opportunity, The Kerala Krusher “lunged forward with an uppercut to the body, but Wolverine jumped back to avoid the powerful shot”.

The Krusher, however, refused to back down and launched a wild overhand right that was not only avoided by Pakistan’s Wolverine but was countered with a “picture-perfect overhand right to the chin” that apparently disoriented the Indian athlete.

The blow put the match firmly on Mujtaba’s side who landed a short right that sealed his victory.

“The referee officially stopped the contest after 56 seconds of the first round, giving Mujtaba his third win on the global stage and elevating his overall record to 10-2,” the report said.

Previous articleChief of Lashkar-e-Mustafa militant outfit arrested in Jammu
Next articleInterview | “Without language, there is no culture”: In conversation with Amin Bhat