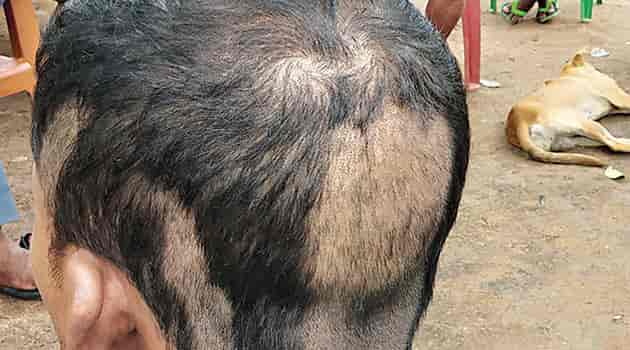 In a Jharkhand village, seven tribal Christians were allegedly beaten, partially tonsured and forced to chant “Jai Shri Ram” in an unproven allegation that they had slaughtered a cow.

Although the incident happened on 16 September and a police complaint was lodged the next day, the matter became public only on September 25 when former zilla parishad member and social activist Neel Justin Beck told a local news portal about it, The Telegraph newspaper reported.

Shams Tabrez, the superintendent of police in Simdega district where the attack took place, told the newspaper that four of the nine accused named in the FIR had been arrested and the rest would be picked up soon. The FIR also mentions 10 unnamed accused.

Deepak Kullu, 26, a tribal Christian from Bherikudar in Simdega, about 145km southwest of Ranchi, said a group of more than 25 stick and rod-wielding people had entered the village early on 16 September. The men were apparently residents of nearby villages.

“Raj continued to plead that no one had killed any cows. But the mob showed us what seemed a fake video of an elderly man from a neighbouring village saying he had seen cows being slaughtered in our village.”

Mr. Deepak alleged the mob dragged him and six other Christian tribal men from the village to neighbouring Mahato Tola, about half a kilometre away, all the while slapping and beating them with sticks and forcing them to chant “Jai Shri Ram”.

At Mahato Tola, they were made to squat under a tree and had portions of their heads shaved by the mob.

“The attackers called the local Simdega police station, accusing us of cow slaughter. The police arrived in a few minutes and took us to the police station,” Mr. Deepak was quoted as saying by the newspapwe.

“The police searched our homes but could not find any trace of cow slaughter and released all of us later in the day. The next day, Jacqueline lodged complaints with Simdega police station and the district SC/ST police station.”