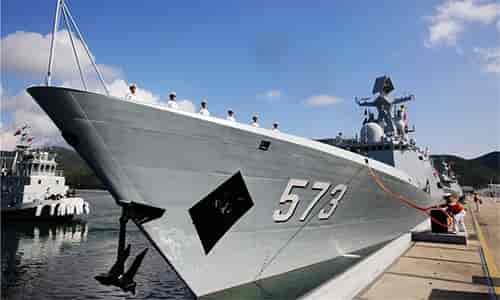 China has launched an advanced warship for Pakistan, the largest it has built for any country.

According to a report by Hindustan Times it is the first among the four most sophisticated naval platforms it is readying for the Pakistan navy amid deepening military and strategic ties with the country.

Quoting Chinese media the report says the Type 054A/P, a guided missile frigate, is the largest combat ship China has sold to a foreign navy and is “an important milestone” for China’s military export sector.

The acquisition of the warship will double the combat power of the Pakistani Navy’s surface fleet, Chinese state media reported. By 2021, the Pakistan navy is expected to have three more similar warships in its fleet.

The Chinese state-owned Hudong Zhonghua Shipyard in Shanghai held the launch ceremony for the advanced warship with top officials and naval officers attending the function.

The shipyard is a wholly owned subsidiary of the China State Shipbuilding Corporation, the largest builders in the country.

“It is worth noting that the 054A/P was purchased by Pakistan as the successor to the F-22P frigate, and the F-22P frigate is an export model developed by China on the basis of the 053H3 frigate. China has been working hard to promote the Type 054A frigate to the international market,” local news website ifeng.com reported.

Type 054A is the best frigate in service with the People’s Liberation Army Navy (PLAN), experts say. The warship has a fully loaded displacement of about 4,000 metric tons and is equipped with advanced radars and missiles.

“The Type 054A is a multi-role frigate and is recognized as the backbone of the PLAN fleet of surface combatants with 30 vessels in commission. They have a length of 134 meters, a beam of 16 meters for a displacement of 4,000 tons,” the navalnews.com, a website tracking naval technology, said in a report on the launch.