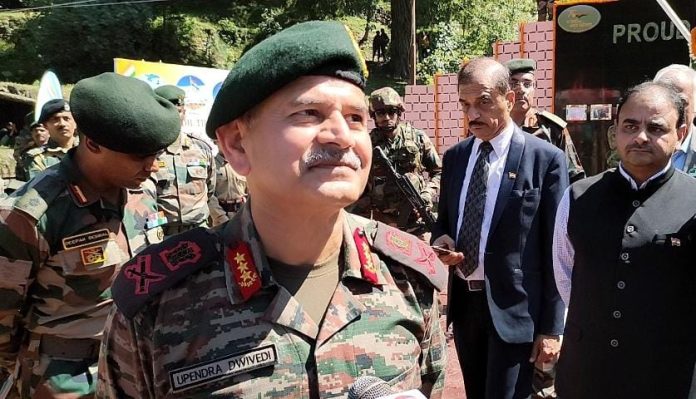 General Officer-Commanding-in-Chief Northern Command of the Indian Army Lieutenant General Upendra Dwivedi (AVSM) on Saturday said that Pakistan understands that ceasefire violation is not going to benefit them and the ceasefire agreement is benefitting people of both the countries — India and Pakistan.

India and Pakistan in February 2021 reaffirmed strict observance of all “agreements, understandings and cease firing along the Line of Control and all other sectors” with effect from midnight February 24-25 February 2021. This was the first time since the 2003 ceasefire agreement that both countries agreed to adhere to the ceasefire.

Whike talking to reporters on the sidelines of a flag hoisting ceremony in frontier Keran area of north Kashmir’s Kupwara district, he said, “Any kind of ceasefire is in the interest of the people as they can attend schools, do their routine work that is why we always try to maintain the ceasefire understanding.”

A 72-feet high monumental tricolor has been hoisted in Keran on the banks of river Kishanganga (Neelam), which divides the area between India and Pakistan. Dwivedi unfurled the 72 feet high flag dedicated by the Flag Foundation of India. He was accompanied by GoC 15 Corps Lieutenant General Amar Deep Singh Aujla.

Dwivedi, while answering a question about the status of the infiltration along the Line of Control, said, “It cannot be stopped entirely but with the support of the people, army here has been ensuring there is no infiltration and in case there is, they are eliminated by the second or third layer of security.”

The flag hoisting ceremony was attended by army, police officials, government employees besides a gathering of locals and NCC cadets.

Dwivedi appreciated the support of locals in hoisting the tricolour and assured every possible support to develop the area that has tourism potential.

“This is a very special day. The entire nation is indebted and we acknowledge the efforts of the people in hoisting the flag. It is a landmark for the entire country and neighbouring country and will remain high always, giving motivation to the people,” Dwivedi said.

While highlighting the tourism potential of the area, he added that the forces have always ensured the safety and security of the people and will promote and develop it [Keran] as a tourist destination across the country so that people of the area can earn a decent livelihood.