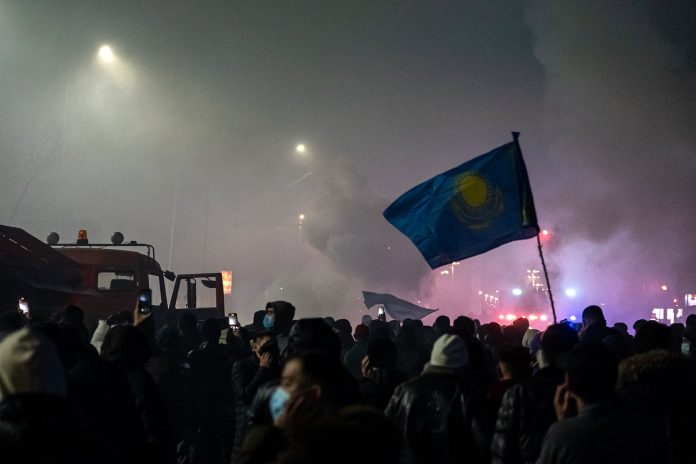 Srinagar: The disruption in the essential services following the deadly protests in central Asia’s Kazakhstan has adversely affected Kashmiri students studying in the region.

On 5 January several hundred Kashmiri students pursuing different educational degrees in the country woke up to the countrywide internet shutdown and subsequently disconnected from families back in Kashmir.

Tensions escalated in Almaty, one of the largest cities of the country after people held protests against the rising energy prices with many demonstrators speaking out against the country’s leadership. The protests started on 2 January after a sudden sharp increase in gas prices which, according to the Kazakh government, was due to high demand and price-fixing.

Thousands are participating in the protests, which were sparked by the lifting of price caps on liquefied petroleum gas (LPG) over the New Year. The protests have spread across the country and have broadened to include demands for greater political representation and better economic benefits.

Hours after the protests erupted, the government of Kazakhstan had to resign thus ending the three-decade rule of Nazarbayev, who still has control over his party and is in charge of the Security Council.

Ghulam Mustafa, 20, had only last month reached Kazakhstan to join the University after getting admission last year. Mustafa has not been far from Kashmir in his twelve years of education.

Until 04 January Mustafa never felt homesick as he would talk to family over video call at least once a day.

“Since the internet is blocked I have not seen my family members. I have only talked to family a couple of times as phone calls to Kashmir cost as high as eight rupees a minute,” Mustafa told The Kashmir Walla.

More than a hundred people have died including the country’s security forces in the wake of violent riots that have shaken Central Asia’s largest country last week, media reported Sunday citing the health ministry.

At least 164 people were killed in the riots, including 103 in the largest city Almaty, which saw some of the fiercest clashes between protesters and Kazhak police. Over 500 have been detained by the presidency for questioning in the past couple of days.

Several students like Mustafa are not only disconnected from their families but equally threatened and worried due to the current situation in the country.

The situation in Kazakhstan is reminiscent of Kashmir as the region has remained home to the world’s longest internet shutdowns and demonstrations in the past several years as authorities frequently suspend the internet to block communication amid civil uprising or anti-government protest.

“It looks like the situation in Kashmir is following us everywhere. We thought the internet shutdown and demonstrations was Kashmir’s legacy and limited to it, but it is not,” said a student pursuing a degree in medicine.

With growing tension in the region, colleges and universities have suspended educational activities that have restricted Kashmiri students to their hostel rooms.

“We have been told by university authorities not to venture out and were told that the classes will remain suspended till 24 January 2022,” said another student Khalid Bashir who is pursuing a bachelor’s degree in medicine.

A brother of one of the students told The Kashmir Walla that since 05 January they were hardly able to connect with their children studying in Kazakhstan leaving families in distress.

“We are worried about our children. My mother would stop missing his son once she would talk to him over a video call. Since the internet shutdown in the country, I face it hard to convince her [mother] why I am not able to make her talk to her son over a video call,” said Mir Mehraj.

“Video calls to our children in the evening was a routine at our home. If she comes to know about the prevailing situation in the country I do not know what situation will emerge at home,” said Mir.

As a concession, President Tokayev said that the vehicle gas price caps of 50 tenges per litre had been restored for 6 months. 50 tenges in Kazakhstan is equal to 8.57 Indian Rupee.

On 7 January, he said in a statement, “Constitutional order has largely been restored in all regions of the country” He also announced that he had ordered troops to use deadly force against protesters, authorizing instructions to “shoot to kill” without warning at anyone demonstrating, calling protesters “bandits and terrorists” and saying that the use of force would continue to “destroy the protests”.

Despite the concession and disproportionate use of forces by the government forces to quell protests, the situation in the country continues to remain disturbed and subsequently Kashmiri students are disconnected from their families.

Authorities in the region however since Monday restored the internet facility partiallyfrom 07:00 am till 01:00 pm.