Army’s ‘Spirit of freedom’ festival for girls concludes in Bandipora 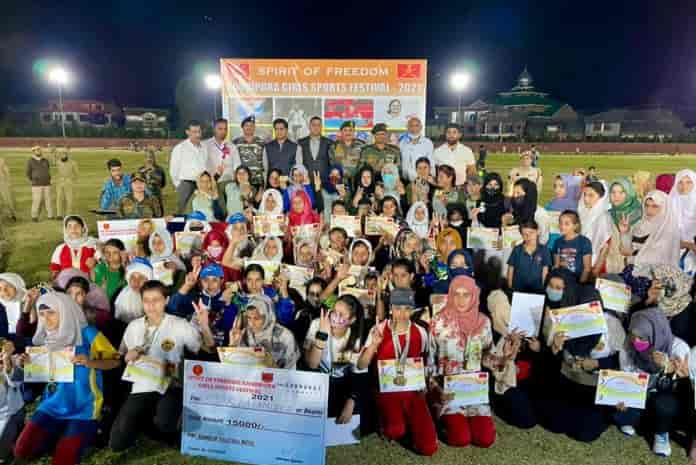 Five days sports festival “Spirit of Freedom” for girls, which was conducted by Bandipora’s 14RR army under the aegis of Manasbal Sector, was concluded on Wednesday at Sher-e-Kashmir Stadium Bandipora.

According to a statement issued to a local news agency—Kashmir News Observer (KNO), the sports festival for girls titled Desire to Fly; Let’s Touch the Sky! Was started by Army’s 14RR on 18 September and subsequently concluded 22 September.

An army spokesman said that the five day extravaganza was aimed at promoting sports and empowering women by providing an exclusive platform to showcase their talents.

He said that the Civil Administration, JKP, CRPF and Local Awam were also taken on board for this initiative wherein sports were utilised to address social issues by empowering women and generating awareness.

“Apart from these competitions, a multitude of activities geared towards generating awareness in various fields were also organised to include Folk Songs & Dance, Martial Arts Display, Felicitation of Women Achievers etc,” he said.

The army said that the festival was first of its kind and impacted people from all walks of life with total numbers estimated to be in hundreds.

“It has generated awareness about Women Empowerment, Women’s Rights & Sports with a view to encourage them to realise their full potential and achieve their dreams, ” the army added—(KNO)