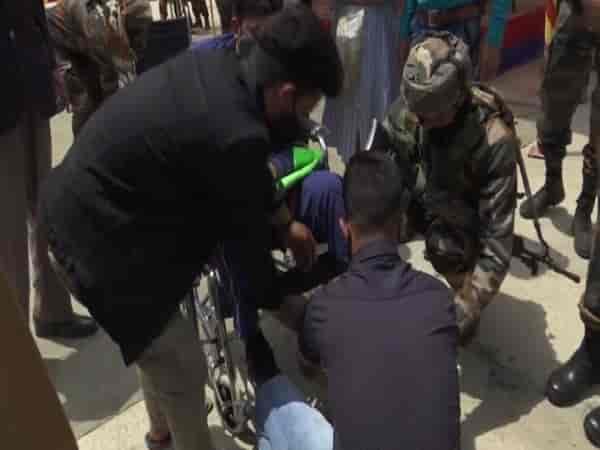 Dozens of persons who had lost their legs during different incidents were given artificial limbs besides other aid in Kupwara district of north Kashmir.

Abdul Rashid Tantray, a resident of Keran area of Kupwara said that he was working as a porter with the Army when he lost his leg in a mine blast a decade ago.

“Now by getting an artificial limb, I am able to move for the first time after 10 years,” he said.

Gulzar Ahmad Khan, a shepherd from the same district, had lost his leg in 2002 in a mine blast when he was with his grazing cattle in the border area.

He said then his relatives and even family members were not behaving well with him since the incident, however, he hopes that everything will be now well as he got an artificial limb and will be able to move around.

Siraj uddin, another local resident who had lost a limb in a separate incident also hopes that his life will prosper now in a positive direction as his movement was confined to bed in absence of a limb.

He said that those individuals who were found to have polio related problems were checked in detail by medical officers and were fitted with calipers, crutches and provided with wheelchairs, based on the severity of their deformities.

He added that a detailed hearing test was also conducted for hearing impaired to identify aids that could facilitate better hearing for the affected.

He further added that a total of 11 artificial limbs, 17 wheel chairs, 5 calipers, 8 crutches and 35 hearing aids were distributed during the event.

Chief Patron BMVSS, D.R Mehta said the NGO is the world’s largest organization for the handicapped in terms of fitment of artificial limb, callipers and providing crutches, ambulatory aids like wheelchairs, and other aids and appliances totally free of cost.

“Our aim is to rehabilitate the disabled persons, especially the resource-less, so they could lead a life of dignity and become productive members of the community,” he said.

He added that we have distributed aid to thousands of people free and he added that such camps will continue in future to reach each and every individual affected in one or the other way. (KNO)