Anti-Shia protests in Karachi amid tensions of fresh sectarian violence 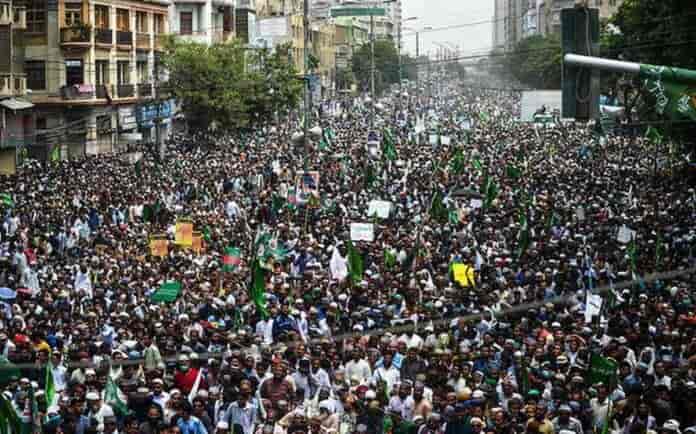 On Friday, thousands of anti-Shiite protesters in Pakistan’s Karachi Friday, sparking fears that rising tensions between the religious groups may unleash a new round of sectarian violence, reported AFP.

The rally followed a raft of blasphemy accusations against major Shiite leaders in Pakistan after a televised broadcast of an Ashura procession last month showed clerics and participants allegedly making disparaging remarks about the historic Islamic figures.

Ashura commemorates the killing of the Prophet Mohammed’s grandson Hussein at the Battle of Karbala in 680 AD — the defining moment of the religion’s schism and the birth of Shiite Islam.

Friday’s demonstration saw thousands of protesters rally near the tomb of the country’s founder — Muhammad Ali Jinnah — where participants chanted “infidels” and “God is the greatest”. “We will not tolerate any more defamation,” said Qari Usman from the Islamist Jamiat Ulema-e-Islam political party during a speech.

Pockets of demonstrators held banners of the extremist anti-Shiite group Sipah-e-Sahaba, which has been linked to the killing of hundreds of Shiites over the years, the international news agency reported.

A Pakistani journalist associated with a leading English-language daily in the country was also taken into custody by police from his residence in Karachi after he allegedly posted social media posts criticising the Army, reported ANI, quoting his family and friends. Mr. Farooqi, who is a news editor at The Express Tribune, was “arrested by the station investigation officer (SIO) of defence police” from his residence in the DHA area on Friday evening, Karachi police chief, Additional Inspector General Ghulam Nabi Memon, told Dawn.

Blasphemy is a hugely sensitive issue in conservative Pakistan where laws can carry the death penalty for anyone deemed to have insulted Islam or Islamic figures. Even unproven allegations have led to mob lynchings and vigilante murders.

Thousands were killed in the previous decade sparking a fierce crackdown by the government forces in 2015 which resulted in a dramatic drop in sectarian violence.

Karachi — Pakistan’s largest city which is also a major business and industrial hub — was once rife with political, sectarian, and ethnic militancy with thousands killed. However, a years-long operation by the government forces starting in 2013 has brought a considerable lull in the violence — but scattered attacks still take place. (Inputs from agencies)