The administration of Uttar Pradesh’s Aligarh Muslim University (AMU) is profiling the Jammu and Kashmir students, the details of which would be shared with the concerned Superintendent of Police (SP) in the area, as per a circular and the university officials.

The move has come days after some Kashmiri students were roughed up on the campus during the J-K students’ protest last week after a Kashmiri scholar ‘was beaten up by UP students’.

The notice has caused panic among students who see it as a “breach of privacy”. “We find it as a soft threat. This hasn’t happened before,” a Kashmiri student at the university, requesting anonymity, told The Kashmir Walla. “J-K students believe it’s a breach of privacy and a violation of fundamental rights given in the constitution.”

He said that it’s the university administration that’s collecting information and providing it to SP Aligarh. “No reason was given and the students are worried about it,” he said.

The deans of the faculties of various departments have received a form AMU’s office of the controllers of examination and are being asked to get the same filled by the students. “I am directed to request you to kindly furnish the Information with regard to (i) total number of students studying in your Faculty / Centre etc. (Male / Female-wise) and (ii) Total Number of Jammu & Kashmiri students admitted (Male / Female-wise, with complete detail) on the following Format during the session 2022-2023 to the Proctor, AMU under intimation to this office,” a ‘time bound’ notice issued on 29 December 2022 read.

The form seeks the name of the student; father’s name; permanent address; present address; class/course and mobile no. “Please attend this on priority as the information is to be provided to Superintendent of Police, Aligarh,” it further read. 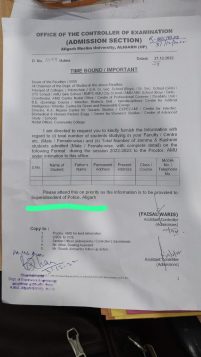 Meanwhile, Professor Mohammad Waseem Ali, the AMU’s proctor, told The Kashmir Walla that the students don’t have to worry about anything.

“We give such information every year and I don’t think that students need to be worried about it. We are also asked to give information about students from various other states. It is not about Jammu Kashmir alone,” he said.

He further added that all the information that is being asked from the students is already in the “public domain”. “We are not asked to give any private information and I don’t think there is any breach of privacy,” he said.

The student stated that if the information is already in public then “why the authorities are asking students to fill out the form. Can’t they do it themselves then?”

“Also, no such form or information has been sought from students from other states,” he said.

The students approached the university authorities to know the reason behind receiving such forms. “They said this was given to us and we just did what we were asked to do. Else we don’t know,” J-K students said. “First, they weren’t aware. Then they said it’s a routine. Still, they will raise this issue with the higher authorities.”

They said that the proctor told the J-K students that ‘he was unaware of the form but he will still raise this issue with the registrar and other authorities’.

Earlier, J-K Students Association tweeted that Aligarh Police is seeking information on 1300 J-K students enrolled in AMU. “This is an act of breaching privacy & clearly goes against the fundamental rights of the Constitution. Request @HMOIndia @AmitShah to take immediate steps to revoke the circular so that no sort of community profiling will be done at the departments of Aligarh Muslim University,” it said.

“… profiling of J&K students is serving an impediment and obstacle to the integration of Jammu and Kasmiri youth to India. Such measures alienate and estrange the youth of Kashmir in general and students studying in AMU in particular (sic),” it further read.

The association added that reconciliation with the students is the only way to further the cause of engaging with the students of J-K. “The profiling has caused scepticism among students and it has become reason for immense anxiety and vexation of students studying in AMU. Was it to suggest that our students are different and not part of the country (sic),” it said.

Meanwhile, a statement issued by senior J-K students enrolled at the university is circulating on social media. “All J&K students (AMU) are requested not to fill out any form or give any personal information to any of the departments, faculties, or provost offices. We believe it’s a breach of privacy and has thrown students into dilemma and anxiousness,” it read.

“Also, the related notice has raised concerns about security issues. We have talked to various officials of the university, they assure us a parallel notice will be issued on an immediate basis for the denial of the early notice,” it added.

The Kashmir Walla tried to reach the police for the comment but has not received any response so far. The story will be updated accordingly.

As per the form, the Assistant Controller Examination has asked its deans of the faculties, Dean Student Welfare (DSW), Chairmen of the all Department of Studies in faculties to submit the details of Kashmiri students studying in the varsity.

Assistant Controller Examination of AMU told a local agency, “I am directed to request these officials to furnish the Information with regard to total number of students studying in the faculty, centre etcetera male and female wise total number of Jammu and Kashmiri students admitted with complete details during the session 2022-2023.”

The officer has directed to furnish the details on priority. “The information is to be provided to the Superintendent of Police of Aligarh.”