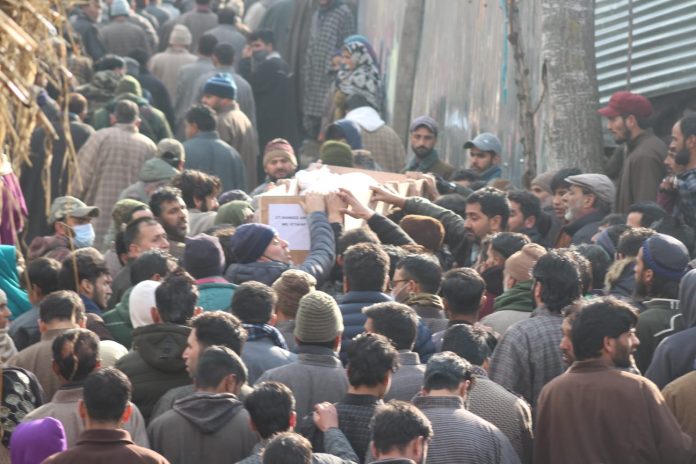 Ganderbal: A pall of gloom descended upon Yachama Kangan area of Ganderbal district after the body of a policeman, killed in Zewan Srinagar attack reached home on Tuesday.

According to reports, body of policeman Rameez Ahmad Baba, who was among the three cops killed by suspected militants in Zewan Srinagar attack last night, reached to his native village on Tuesday afternoon.

Witnesses said that hundreds of mourners from different areas of Kangan belt including men and women and children thronged to Yachama the native village of the slain cop to take part in his last rites.

Amid sobs and tears, body of Baba was later laid to rest in his ancestral grave yard in which hundreds of people participated.

Baba has left behind three sisters, a brother and elderly ailing father.

“He (Baba) was our lone bread earner and with his killing we have last everything. There is none in our family who is earning,” his family members said. “His killing has left us all in shock.”