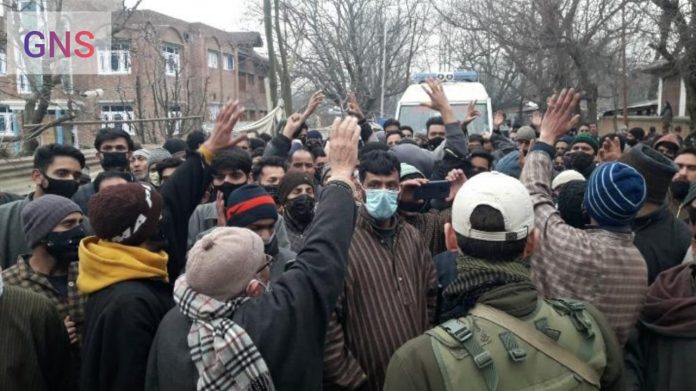 A family on Tuesday staged a protest at Shelipora Achabal here in this south Kashmir district, alleging murder of their daughter by her in-laws over dowry issue.

The family and relatives of the lady, joined by neighbours, hit the street near Shelipora Achabal and demanded action against the in-laws of woman.

Mohd Yousuf Mir, father of the deceased woman, alleged that she killed by her in-laws over dowry. “From time to time, we have been fulfilling their demands of dowry,” he said, adding, “She has been killed there as she was given some poisonous substance.” He said her in-laws left the hospital after she died instead of taking her body to the house for last rites.

Meanwhile, the protesters demanded strict action against the in-laws and said the concerned authorities should act swiftly so that the culprits are brought to book immediately. Police said the 30-year-old woman was brought dead to the hospital and preliminary medical report suggests cardiac arrest as cause of death.