“Abrogation of Art-370 a historic move, paved way for development of J-K” 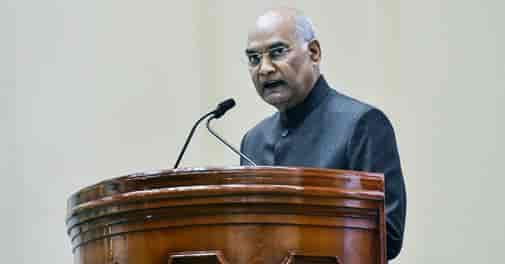 President Ram Nath Kovind has said that the central government’s decision to scrap Article 370 of the constitution from Jammu and Kashmir as a historic one and that it has paved the way for equal development of Jammu and Kashmir and Ladakh.

“The abrogation of Article 370 and Article 35A of the Constitution by Parliament is not only historic but it has also paved way for equal development of Jammu and Kashmir and Ladakh,” said Kovind while addressing the joint session of Parliament ahead of the Budget Session.

The President stressed that rapid development of Jammu and Kashmir and Ladakh, protection of culture and traditions, transparent and honest administration and empowerment of democracy are among the priorities of his government.

The President said that the government was working with “full force” to rid India of militancy and government forces have been given a free hand in taking the “strongest” measures possible to deal with the menace.

On tackling militancy, he said alertness on the part of the citizens is extremely helpful in dealing with the challenge in view of the changing nature of terrorism.

“My government is working with full strength and determination to free the country from the scourge of militancy,” he said.

“The decrease in militant activities in Jammu and Kashmir demonstrates that public cooperation can be effective in the fight against militancy. My government has given the government forces a free hand in taking the strongest measures against those indulging in militancy,” the president said.