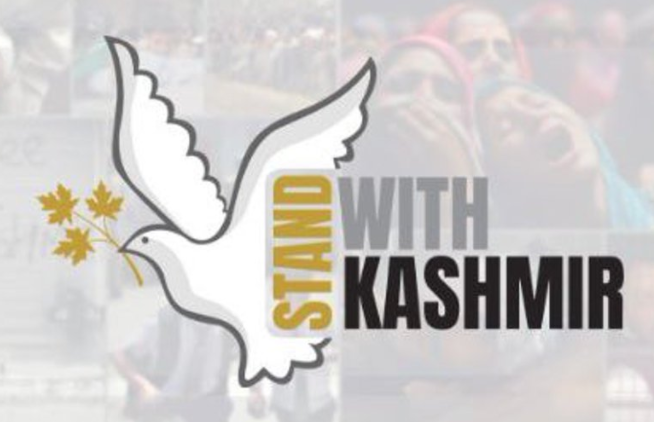 On May 26, an Indian news portal published a libellous article intended at questioning the credibility of Stand With Kashmir (SWK), a pre-eminent collective of diaspora Kashmiri academics – that came up post August 2019 and aims to present the Kashmiri narrative at the world forums.

The article, written by Martha Lee of the ‘Islamist Watch’, a subsidiary of the ‘Middle East Forum, described as a far-right, Islamophobic, and xenophobic organization that is often seen peddling concocted conspiracies of a ‘threat’ – of the world being taken over by ‘Islamic Caliphate’.

Expectedly, the author strongly maintained that reputation of her organization, of slandering with little political contexts and much out of vehement hate and abomination. The piece reads like a tirade of sullen diatribe against SWK by a textbook example of a spin-doctor. To respond to each of her allegations would require a considerable amount of time and space, therefore I will focus on a few key points only.

Ms. Lee has taken a nasty jibe at the credentials of some of the foremost experts – historians, journalists, and academics who have a massive, and publicly available, academic weight behind their opinions on Kashmir. The diabolical label of ‘so-called’ that the author contrived and the editor-approved of, goes into revealing the mindset that went into the arrangement of the article. Perhaps, Ms. Aarti Tikoo Singh, the ‘investigative journalist’ who only ‘sometimes’ misses the line between satire and serious news; truth and lies; holds the credentials enough, to be called an ‘expert’ on Kashmir.

The author appeared to hold SWK hostage to the personal extremist views of an individual who, according to SWK, has ‘no association whatsoever, with them’. In fact, as is very typical of the far-right ideologues, Ms. Lee triumphantly, albeit wrongly, painted over the entire Kashmiri political discourse and reduced it to the extremist views of an individual. While doing so, Ms. Lee deliberately and viciously presented one individual’s personal views as an abstract monolithic aspiration while disparagingly occluding the heterodox cultural and political thought that sways the political movement in Kashmir.

This misrepresentation stems from the deeply rooted Islamophobia driven hate that views everything related to Islam abhorrently, and Muslims as an anathema who cannot adjust to the postmodern ideas; hence deriving on the culpable individual views, Ms. Lee derided the Kashmiri people as a whole and gave herself the privilege to declare the ‘exclusivity’ of our political and cultural aspirations.

While dishing out gratuitous criticism, Ms. Lee has seemingly taken on face value, every word from the state. ‘Islamist Watch’ lists the author as a ‘researcher’- one wonders how a ‘researcher’ is able to remain completely unchallenging to a narrative. In Jordan Peterson’s words, an easily ‘agreeable’ person, therefore the lop-sidedness becomes apparent throughout her article – characteristics that are very unconvincing and traditionally unusual for a serious researcher.

The right-wing zealots, even as ‘researchers’, draw dodgy conclusions from their half-baked ‘research’ and Ms. Lee stood true to that tradition as well. While conveniently disregarding the well-reported aspects of thousands of Kashmiri political prisoners, who are languishing in jails across India, Ms. Lee chided SWK for their ‘Release Kashmiri Prisoners’ campaign. The SWK told me that “(the) effort via our release Kashmiri prisoners’ campaign was to advocate on behalf of a diverse range of Kashmiris of various political positions who have been detained by the Indian government. We wanted to underscore that on a fundamental level, the Indian justice system is flawed, and push back against the idea that any of these individuals will be treated according to any semblance of due process under this system”.

One has to be either perfidious or wilfully ignorant to the political and military landscape of Kashmir to be writing a Machiavellian account of anything related to Kashmir and it appears that Ms. Lee is both. A place where journalists are hounded and intimidated by frequent summons to police stations, where the reach of the powerful knows no bounds because the accountability of any sort is overshadowed by the ‘laws‘ that guarantee no reprisal. Yet Ms. Lee finds it surprising that there could be people imprisoned for political views.

In such a place, it is not difficult to imagine how the state would bring its tentacles to stifle the political movements across length and breadth. Perhaps Ms. Lee could do less of her Islamophobia – driven ‘research’ and do more research and find out how people in Kashmir are detained ‘on grounds of ideology’. Ms. Lee does not appear to comprehend or perhaps she condones the Orwellian realities of Kashmir.

Tail Piece: The Islamophobia factory of an organization that Ms. Lee works for, does not list a single of her publications in any reputed mainstream media organizations, yet The Print, which declares – ‘If The Print has any default position, it’s factual and liberal’, carried such a canard that had no objectivity in its analysis and lacked the basic decency of presenting the facts as they are without any manoeuvre to manufacture a ‘true face’. Platforming a bigot – does it come as a surprise? Not after The Print ran an opinion piece that denounced the Pulitzer Prize to three Kashmiri journalists with ‘lügenpresse – (lying press)’ in its title.

The author has no association with the Stand With Kashmir. You can follow him at @ullahi_