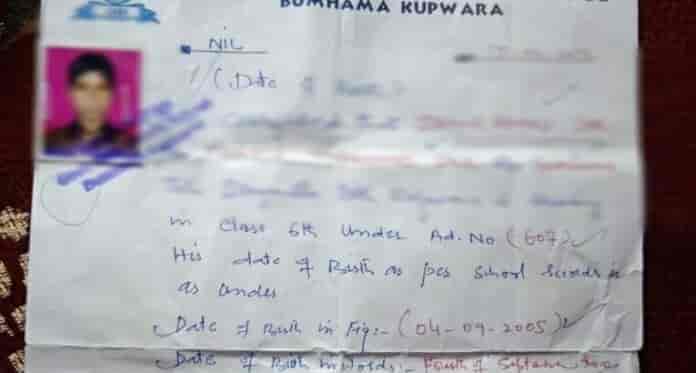 A fifteen-year-old boy is among the eight people booked under an anti-terror law for sloganeering at the funeral of a road accident victim in north Kashmir’s Kupwara district.

Zahoor Dar, the 15-year-old resident of Bumhama village of Kupwara district, was arrested on 29 May under the Unlawful Activities (Prevention) Act (UAPA) which empowers the police to detain an individual for at least 180 days before filing a chargesheet in the court.

“He went there [police station] and is yet to return home,” Khazir Dar, father of Zahoor, told The Kashmir Walla.

Khazir, a labourer, was at work when his son was arrested and was later informed by a relative. Since then, Khazir has been going to Kupwara police station in the hope of returning home with his son. “He is innocent,” he said. “I don’t think he has done anything.”

Last week, Mohammad Amin Dar of Bumhama had died in a road accident near his village. At his funeral, Nazir Ahmad Sarpanch Bumhama — who is also a relative of Zahoor — said someone had shouted the “pro-freedom slogans”. “It’s clear in the video who raised the slogans,” he said. “But some of them [arrested men] are innocent.”

The sarpanch, the village headman, said he was told by the police to ask the eight men to present themselves at the police station for “signing an apology”. “Only four of them went there that day,” said Ahmad. “But then all of them were booked under UAPA.”

A senior police official confirmed Zahoor’s arrest and said that he has been sent to the Juvenile Home Harwan. “We did everything as per the law,” he said.

Mir Urfi, a Srinagar-based lawyer, said that “in any of the situations, a minor is to be released from custody as soon as possible”.

She added: “There is no age bar for arresting under UAPA, however, a minor gets a bail protection under the juvenile act.”

The GNS report said the case has been registered under Section 13 of the UAPA, 1967, which prescribes up to seven years imprisonment for “advocating, abetting, advising or inciting the commission of any unlawful activity”.

It is not the first time that individuals have been booked for sloganeering under UAPA, a stringent anti-terror law. Last month, Tehreek-e-Hurriyat chairman Ashraf Sehrai’s two sons, Rashid and Mujahid, were also arrested under UAPA for sloganeering at their father’s funeral. Days after, both of them tested positive for COVID-19.

In March, New Delhi said 876 cases were registered and 505 persons were arrested under the UAPA in J-K between 2015 to 2019. Those who were booked include journalists, activists and minors.

Last year, the United Nation had expressed concern as it noted that the UAPA “authorises warrantless searches and individual arrests for up to 6 months when the person is designated as ‘terrorist’. Moreover, its broad scope makes it easily amenable to abuse.”

Khazir, the father of the teenager, said that he has talked to his son twice since he was arrested last week. “He told me he is fine but wants me to get him out of there,” Khazir said.

While he gets a chance to talk to his son, Zahoor’s ailing mother hasn’t been informed of his arrest. “She has heart problems,” Khazir said, adding that he tells her that Zahoor has gone to his maternal home. “How can I tell her that her son is in jail?”

Following the arrest, the Dar family is struggling with the anxiety of many what-ifs. “My mother would die of heart attack if we tell her,” said the elder sister of Zahoor, Kulsum.

For her, it has been really difficult for everyone in the family to pretend that everything is fine when nothing really is. “Only we know what we are going through,” said Kulsum.

“This has happened for the first time,” she said. “Allah knows what is happening to me, how we are handling this.”

The family hardly eats anything, said Kulsum. “We are worried,” she said. “They aren’t releasing him.