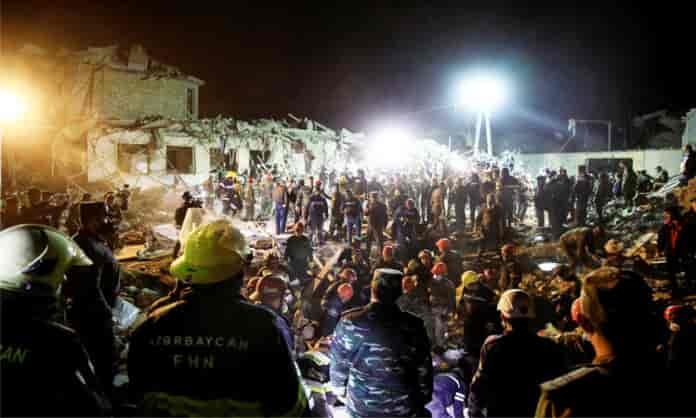 Thirteen civilians including two children have been killed and more than 40 people injured in an early-hours missile attack on Azerbaijan’s second-biggest city, Ganja, the Azerbaijani prosecutor general’s office was quoted as saying by AL-Jazeera.

A missile raid leveled a row of homes in Azerbaijan’s second city of Ganja, killing and badly injuring people in their sleep in a sharp escalation of the Nagorno-Karabakh conflict.

The Armenian defence ministry denied the claim and accused Baku of continuing to shell populated areas inside Nagorno-Karabakh, including Stepanakert, the region’s biggest city.

Mushfiq Jafarov, a member of parliament from Ganja, told Al Jazeera stringer Seymur Kazimov that the death toll from the attack on Ganja now stands at 13.

“There are only civilians living here,” he said, adding that two little children were among those killed.

Previous articleKashmir should be divided into two more UTs, one for Hindus and another for rest: IkkJutt Jammu
Next articleBJP leader shot dead in UP’s Ferozabad ahead of assembly bypolls