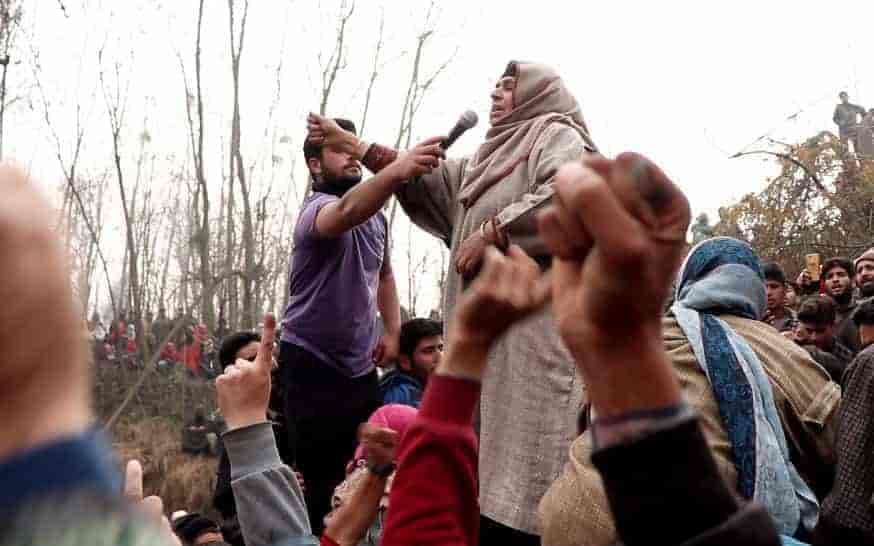 Mother of Shakir Hassan Dar, who was member of Zakir Musa led outfit, raising slogans at his funeral procession on Tuesday. Photograph by Vikar Syed

When popular rebel commander Burhan Wani’s brother Khalid Wani was killed in an alleged fake encounter on 13 April 2015, their home town Tral was filled by chaos.

In the subsequent protest next day, two young boys from Rathsuna village, Sabzar Ahmad Bhat and Shakir Hassan Dar, snatched rifles from the government forces and went on to join Hizbul Mujahideen militant outfit. Shakir was only 16-years-old back then.

Although teenage Shakir was not well aware about the risks of carrying a gun in Kashmir as a militant, his family was worried over the decision and kept struggling to get him back home.

As per his family, before joining militancy, Shakir’s interest in studies had waned. His father, Ghulam Hassan Dar, opened a shop outside their house to keep his son engage in business, but he had something else in mind. They tried to motivate him to focus on his studies, but all the attempts fell weak.

Shakir was the youngest among the Burhan Wani led group and could be seen in some pictures with Wani and also with Zakir Musa, who had joined in 2013.

After Wani’s killing in a gunfight with the government forces, on 8 July 2016, Valley witnessed another months long civilian uprising in its dark history and pushed significant number of youth to pick guns.

Soon with the dramatic departure of Zakir Musa from Hizb in May 2017 to lead a new Al-Qaeda inspired outfit Ansar Ghazwat ul Hind, Shakir followed his path and joined him.

In Ansar Ghazwat-ul-Hind, Shakir was given a new name: Abu Dujana, ostensibly in memory of a Pakistani commander who left Lashkar-e-Toiba and was the first to join Ansar.

Since its formation, over a dozen members of Musa’s outfit – including Pakistani militant commanders Abu Dujana and Abu Hamas – have been killed in various gunfights. The police has also arrested several of his Over Ground Workers (OGW), some of whom were attempting to transport weapons outside the state.

Today, almost 3 years after his joining, Shakir died in a joint operation by 42RR, 180 BN CRPF and SOG, in Reshipora area of Tral.

At Shakir’s funeral in Rathsuna village in Tral, slogans praising Musa filled the air, while youth whispered with each other. “There can be many groups,” said a youth, in the crowd of mourners. “People talking against Musa are actual agents, he has gone out to fight, like many others, like other groups too. His path is different but the goal is same.”

After a few moments, a group of people helped Shakir’s mother to reach near her son’s body, covered with black flag with Musa’s name on it. She climbed the make-shift stage and kissed her son, and then raised pro-freedom and pro-Musa slogans.