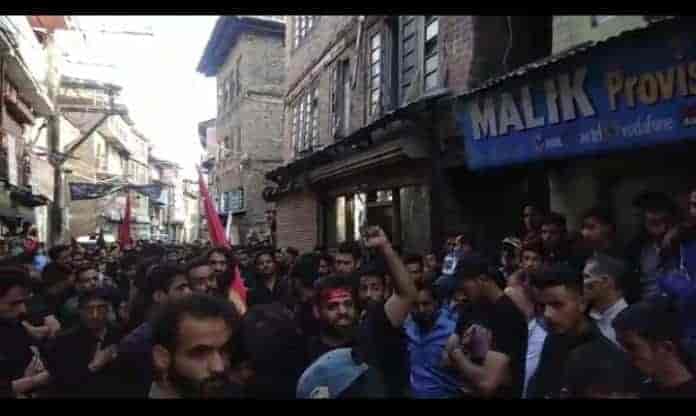 Even two years after his death, slain Hizbul Mujahideen commander Burhan Wani continues to be remembered in the Kashmir valley. The latest of which happened during a Muharram procession taken out by Shia Muslims in Srinagar’s downtown area on Monday.

In a video that has gone viral on social media and has garnered millions of views a youth can be heard praising the 22-year-old commander who was killed in a gunfight in south Kashmir’s Bamdoora area of Anantnag.

In the video, the youth wearing a headband that has name of Imam Hussain on it can be heard comparing Wani with grandson of Prophet Muhammad who was killed in the plains of Karbala 1400 years ago.

“Today Kashmir is Karbala. And every day is Ashura in Kashmir,” the youth can be heard saying in a procession of hundreds of Shia Muslims.

He further compares the cause of Imam Hussain with that of  Wani, “Shaheed Burhan Wani’s mission was similar to Imam Hussain. Burhan stood against millions of Yazeedis (Referring to the government forces) like Imam Hussain did. Imam Hussain had 72 companions, while as Burhan had 11. Our salutes to Burhan,” the youth says in the one minute clip.

Ever since the beginning of Muharram, Shia Muslims in Kashmir have demonstrated against the killings in Kashmir by raising pro-freedom slogans during the mourning processions, videos of which have widely been shared on social media.

Despite the video spreading like wildfire, Facebook has deleted the video from various pages and blocked accounts of people posting the video, yet again raising questions on the freedom of speech that the social media giant claims to profess.

Imam Hussain along with 72 of his companions was brutally killed for standing against injustice and tyranny prevalent during the reign of Ummayad Caliph Yazid Ibn Muawiyyah.

Shiite Muslims across the world commemorate the event by taking out mourning processions. In Kashmir too Shia Muslims remember Imam Hussain by taking out processions and holding other events. However, the main processions that used to be taken out from Srinagar centre stand banned by authorities ever since the inception of armed struggle against Indian forces in Kashmir.