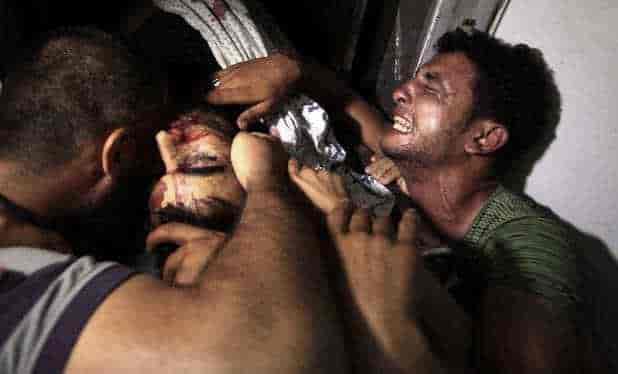 On 12 June 2014 three Israeli teenagers were kidnapped. The world turned upside down. The international community rushed to condemn the killers. This was ironic, considering they barely give a second thought to the countless atrocities that take place in Palestine. According to the Ministry of Information in Ramallah, 1,518 Palestinian children have been killed by the Israeli Defense Forces between 2000 and 2013.

In response to the tragic discovery of the dead bodies of the three teenagers, the Israeli government authorized air strikes into Gaza. This has been framed as a measure of self-defense but the subsequent carnage would suggest otherwise. They have targeted more than 70 homes and killed atleast 80 Palestinians, more than 50 of them civilians.

For us, the war here means every Palestinian thinks they are the next martyr. It started when the Israeli army arrested the liberated captives and burned Mohammed Abu Khdeir alive. What does everyone imagine when someone from your country is burnt alive and Gaza is bombed relentlessly? They say Gazans kidnapped the three Jews. How they did it is unclear.

Here in Gaza, the resistance should save Palestine from Israel’s aggression. The Jews said they bombed the resistance, not the civilians but pictures with this report show they bombed civilian homes, killed children. Mothers say their children didn’t do anything; why did Israel kill them?

Things here are very bad. The Jewish army bombs everything that moves. They don’t care who dies. They just bombed homes with children, mothers, youth and senior citizens. When people outside tell you to run for safety you laugh like a crazy person and say, “Run where?” This is our home, our country. We will not run. And even if we want to run, they bomb every place. If you don’t die here, you will die there. People tell us to run to Egypt but then we are still surrounded by the Jewish army. Their planes stir with Arab fuel.

Over here, there’s a common phrase: “the last hug”. It refers to the moment in which a father hugs his dead son; a son hugs his dead mother. They call us terrorists; they claim we are the extremists and they blame us for being angry. They call our religion violent.

Maybe I can write the next report, maybe not. Maybe I’ll write it from another place. Maybe someone else will write a report about me because I’ll be gone.