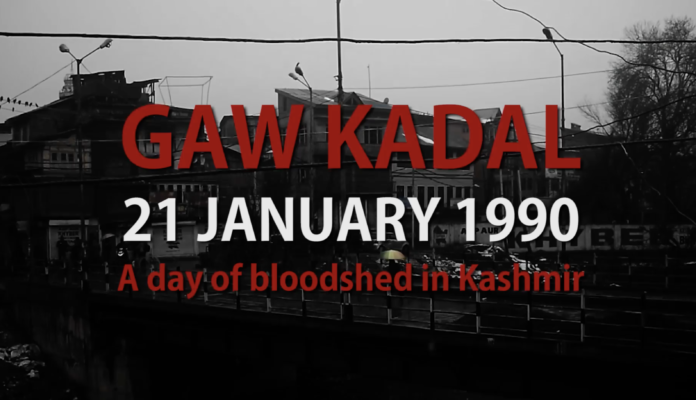 Srinagar: It has been over 31 years since 21 January 1990, when the Indian paramilitary troops of the Central Reserve Police Force (CRPF) opened fire on a procession passing over the bridge that connects Basant Bagh with Maisuma, in Srinagar, killing at least 52 people and injured 250 according to survivors and media reports.

The major killing became known as the ‘Gaw Kadal massacre’ and now is usually marked by a shutdown.

Just two days after the Government of India appointed Jagmohan Malhotra as the Governor of erstwhile Jammu and Kashmir on 21 January 1990, a mass protest rally was being carried out by the pro-freedom leaders in the Kashmir capital Srinagar.

As people reached the Gaw Kadal, the CRPF personnel deployed there opened indiscriminate fire killing more than 50 people and injuring hundreds of others (As per survivors and media reports) according to news agency Kashmir Dot Com- (KDC).

The massacre was named after the Gawkadal Bridge in Srinagar, Kashmir. The survivors recall that the Indian paramilitary troops of the Central Reserve Police Force (CRPF) opened fire on a group of Kashmiri protesters in what has been described by some authors as “the worst massacre in Kashmiri history”.

What led to protests on that day?

The forces conducted house to house searches during the preceding night that day to search for militants and trace the weapons and other ammunition which according to them was kept in the houses of locals. The word spread among the people that during the house to house searches by Indian forces, the women were molested and it spread like wildfire across Kashmir Valley.

At Ghanta Ghar, Lal Chowk, the police officer DSP Alla Baksh, stopped the procession and forced them to move towards Gaw-Kadal via Maisuma. As people reached on the Gaw Kadal Bridge, the CRPF personnel already deployed there opened indiscriminate fire and in the ‘massacre’ at Gaw Kadal, 52 civilians were killed and more than 250 were injured.

According to the FIR, people from different parts converged at Gaw-Kadal defying the curfew. The people were raising slogans against the Indian government and had demanded the demilitarization of troops and paramilitary forces from Kashmir. The deployed forces in the curfew area resorted to indiscriminate firing that led to mayhem. In the ‘massacre’ at Gaw Kadal, 52 civilians were killed, according to unofficial estimates, while the police in its FIR mentioned the death of 22 persons.

In February 2019, the police said they had closed the investigation into the 1990 Gaw Kadal killings case saying they found no clue to trace the accused persons. The police in their reply to the State Human Rights Commission had also said the records pertaining to the incident were lost in the 2014 floods.

Following the ‘massacre’ the remembrance of the incident of 21 January  1990, is now an annual affair and is usually marked by a shutdown. (KDC)

Previous articlePolice summons Kangana in defamation case filed by Javed Akhtar
Next articleHighway uncertainty must end once for all: Stakeholders to Parliamentary delegation