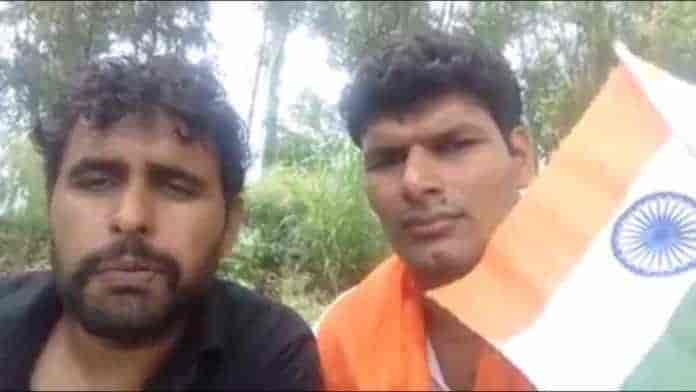 In a video that is being widely circulated on WhatsApp, two men are seen claiming that they are responsible for the attack on JNU student Umar Khalid on 13 August outside New Delhi’s Constitution Club, The Quint reported.

The men in the video own the attack on the student leader and say they won’t let terrorists like Afzal be born in India, “Our message to all our fellow Indians is that we have done this attack not for ourselves, but for the entire nation. We do not care even if we lose our lives for this. We will not let terrorists like Afzal be born in this country.”

They continue, “He (Umar Khalid) had said ‘Bharat tere tukde honge.’ We will not tolerate those who stay in India and try to break India into pieces, those who commemorate the death anniversary of a terrorist by chanting anti-national slogans like ‘Pakistan Zindabad’. We seek the help of all our fellow Indians in this fight that we have started. They should not support such anti-nationals.”

They continue, “We respect the Supreme Court and the Constitution, but we are angry that there is no proper provision in the Constitution to punish these mad dogs, like the JNU gang. Our elders in Haryana have taught us that mad dogs should be done away with, without delay. We, Darvesh Sapur and Naveen Dalal Mandothi, are responsible for the attack on Umar Khalid in Delhi. This attack was a gift from us this Independence Day. We will surrender to the police on 17 August at 12 noon at patriot Kartar Singh Sarabha’s village, at his home.”

Kartar Singh Sarabha was a Sikh revolutionary who died in 1915. The village of his birthplace, Sarabha, falls in Punjab’s Ludhiana district, at a distance of 328 km from Delhi.

Towards the end of the clip, which is 4 minutes and 31 seconds long, the man on the right of the screen says,

The man on the left of the screen continues, “Umar Khalid says that there is fear in this nation. Look at the number of soldiers at our borders who are getting martyred, so many police personnel are working day and night on the streets. If you are still scared, go to Pakistan. Your fear was supposed to be put to an end, brother.”

According to the report by The Quint one of the eyewitnesses to the attack has claimed that there are specific similarities between the facial features of the attacker, and one of the men in the video.