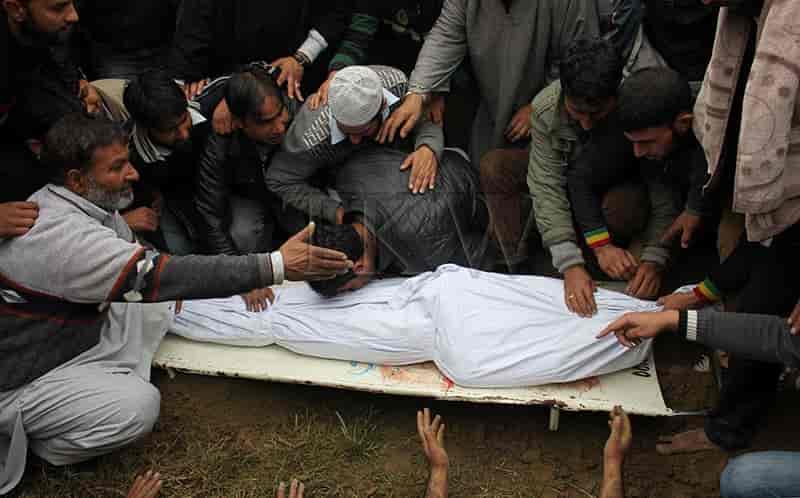 It was early morning on Tuesday, a lorry enters in the courtyard of Mohammad Yusuf Bhat’s house carrying a makeshift tent that will be pitched in the courtyard where dozens of women have gathered to mourn the killing of his son.

“Oh brother, are you hungry? Do you want tea? Oh groom, we are not crying, we are singing,” screams a woman. “He was a kid and they pumped bullets in his body. They are killing us in front of the whole world. We are innocents. We are being killed and then given a bad name. We want blood for blood. We want the murderer,” another follows.

While the tent was erected, hundreds of men are in the graveyard next to the house in Banpura area of Nowgam – on the outskirts of summer capital Srinagar. Hundreds of young and old men are carrying the shrouded bodies of Faisal Yusuf Bhat – a 14-year-old student and Mehraj ud Din Dar, 21, who were killed by the army last evening. The two bodies and two of their injured friends were found in the car, turned into a sieve, as dozens of bullets, were fired at the vehicle. The blood oozed out of the bullet holes in the car. Among the injured being treated at the Army Base Camp hospital in Srinagar, one is critical.

That day earlier in the afternoon, Faisal was helping his mother to fix new curtains at home. He went to his uncle’s house next door, asking his cousin to see if the curtains are looking better now. “I found them darker and told him to get them changed. So he went to change the curtains and on his way he met some friends. They were going to a Muharram procession at Khanda,” said Jan Muzaffar.

‘They are killing us in front of the whole world. We are innocents. We are being killed and then given a bad name. We want blood for blood. We want the murderer’

Eyewitnesses said when the four friends in a Maruti 800 car were asked to stop by army at a checkpoint in Chattergam village of Budgam district; the car stopped a few meters after the checkpoint. “Maruti 800 car is normally like that as it doesn’t have power breaks,” adds Muzaffar.

While Muzaffar tells me this outside his house, youth in the street is facing tear gas shells, pellets and throwing stones at the police and other government forces. He shouts to close the gates. Two women from the neighbourhood enter the tent and the wailing intensifies.

The women from the neighbouring areas visiting to console the families have to walk through the road that overlooks the graveyard in which the boys were buried in the morning. On the way to Mehraj’s house, a few stop near the fence to see the two graves.

Twenty-one year- old Mehraj, whose older brother is in shock, was friends with Faisal. A government employee, Ghulam Mohammad Dar’s two-storey house is filled with people visiting him after son’s killing and the women are sitting in the tent. The wailing continues and amplifies as relatives and neighbours enter the tent.

It is noon and Mehraj’s grandmother who has been sitting in the tent since morning calls his name. “Who will carry my coffin now? Who will attend my funeral now?” she screamed.

One of the relatives of Mehraj said that the army is killing people every time. “Where should we go now? Innocents are getting killed. First they kill us and then ask for the apology. They want us to be dependent on them but nothing like that will happen, we want freedom,” said Wasim Ahmad.

A prominent human rights defender from Kashmir, Khurram Parvez, doesn’t see these civilian killings as something new. “Kashmiris have faced this for years. There has been unprovoked killing of civilians. And the point is why does it happen again and again?”

‘Who will carry my coffin now? Who will attend my funeral now?’

People in the area have anger against the army and the state government. On hearing that the army has apologized for the killing, Muzaffar responds, “Burhan was not a chicken that we will accept apology. It is not an unfortunate incident, as they have been saying now. This has been going on for years.”

Parvez believes that the reason that these killings continued is that no one has been punished ever. “If there would have been any prosecution, army may have stopped. They shot because they knew that they would get away with it. The only thing they will do is to order an enquiry. In the past also, there have been zero percent conviction rates. They don’t want to demoralize the morale of soldiers. Allowing them to kill boosts their morale,” said Parvez, who works with Jammu Kashmir Coalition of Civil Society (JKCCS) – a human rights group.

Faisal’s family has decided to follow the investigation but says, “We know nothing will happen. Omar Abdullah has called for a probe, but someone should tell him that he has so many probes like these.”

The JKCCS had produced a report “Alleged Perpetrators” naming around 500 government forces that were involved in civilian killings, torture, rape or any other such human rights violations. But the government didn’t take any serious note of the report.

Parvez adds, “There is no remorse in killing Kashmiris. The spineless Chief Minister only asks for probes. Had he been really concerned, he would have done anything in 2008, 2010 civilian killings. Government ordered hundreds of probes and Omar (Abdullah) knows probe is only to pacify the anger.”