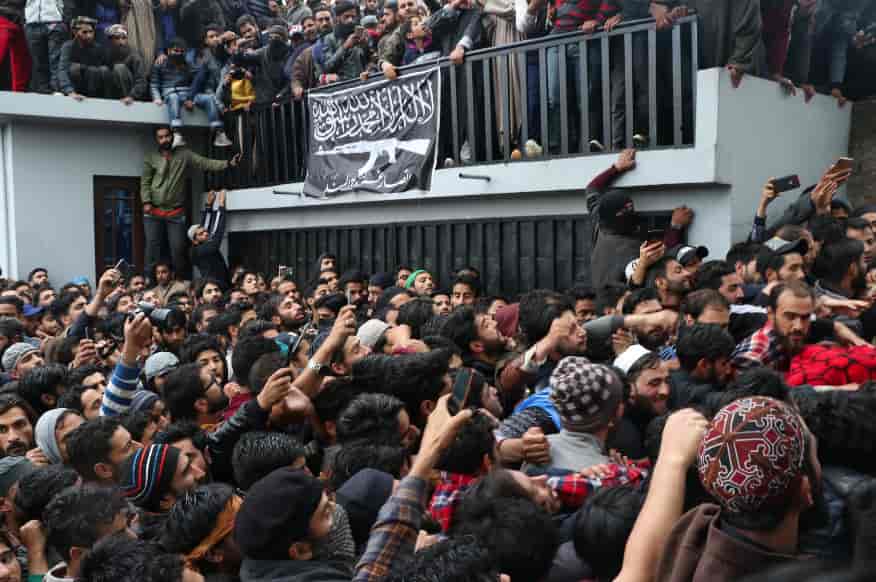 Supporters of Zakir Musa outside his house in Dadsara village of South Kashmir’s Pulwama district on Friday as his body arrives. Photograph by Vikar Syed for The Kashmir Walla

On Friday, at dawn, a young college student was swiftly walking along with hundreds of others, all drenched in rain – on the road that led from Noorpora village to Dadsara village of Tral in Pulwama district – one of the four districts of South Kashmir’s most volatile area. He had walked and partly hitchhiked over 40 kilometers from Central Kashmir overnight to reach here – only to attend the last journey of his ‘ameer’ – like many others in the crowd.

Zakir Rashid Bhat alias Zakir Musa or ameer for his followers was now the most popular and wanted militant commander in Kashmir’s armed movement after his predecessor Burhan Wani’s killing in July 2016. If Wani had the charm of attracting youth to militancy, Musa achieved the skill of popularizing an ideology – of ‘fighting for the establishment of Sharia (Islamic Law).’

But Musa became prominent after his controversial disassociation with Pakistan based militant group Hizbul Mujahideen in July 2017, clearing the intention of establishing the idea of Kashmir’s freedom struggle as a struggle for pioneering the path of Islam and not for nationalism or secularism.

In one of his video speeches, Musa said, “Our intention should be that, we have to achieve azadi to establish Islamic rule and not for secular state. If we are fighting for secular state then my blood won’t be spilled for that purpose.”

Musa’s life has been contested by many across the political and religious divide. Even though at one point Al Qaeda founder Osama Bin Laden was praised on his death in 2011 and people offered absentia funeral prayers In summer capital Srinagar but many continued to denounce Musa’s path since he parted ways to launch his own Al Qaeda affiliated or inspired front – Ansar Ghazwatul Hind (AGH) in July 2017.

Discrediting the image, saving the status-quo

When Musa distanced himself from Hizbul Mujahideen outfit in May 2017 and went on to make a controversial statement of hanging Hurriyat leaders’ heads in city centre, Lal Chowk, he knew he had made enemies – not just physical but ideological. Over the next few weeks, militant groups and pro-freedom and pro-Pakistan groups called him out in public.

After Musa’s statement, most of the reactions from Kashmir’s political and militant leadership was that his path has nothing to do with the ‘freedom movement’ as he was introducing ‘global terrorism in Kashmir.’

People on the streets also began to say that Musa divided Kashmir. In late 2017, I traveled across several villages of Tral – including Wani’s home and also Musa’s village to understand the undercurrents. There were whispers of Musa’s different path yet the youth – and also those inspired by other militant outfits, supported him because he was fighting for the same cause.

In the months to follow, Musa’s popularity grew massively among youth – irrespective of urban and rural divide. At every protest, “Musa! Musa!” slogans would reverberate and walls filled with his painted name. The reason continued to be him being the one person against status-quo and attempting to pave a different path – in which there was no Pakistan, India or just azadi, but a rule guided by the religion Islam.

Hurriyat’s criticism and early negation of Musa has also been a reason the group has lost a major support base among many youth post-2016, mainly in Southern Kashmir. While the leaders called Kashmir’s movement a ‘political struggle’, Musa said that it can’t be political as per your convenience.

Not just freedom – but Khilafat

Musa and Khilafat are the two words you can find painted on many walls in Kashmir now – cellphones of his supporters are filled with videos that justify or teach why Khilafat is the only way forward for Muslims.

For these supporters of Musa, or youth who are against Hurriyat, Kashmir is not only about secession from India but to establish the rule of Islam – meaning to follow the law of Quran. These are not poor, underprivileged, uneducated supporters, many may want to say, but well educated urban class section is in this too.

Several recruits of Musa were those who quit Hizb or LeT to join his AGH. Two such prime examples were Sauleh Mohammad alias Rehan whose family was living in Gorikadal village of Tral town and quit studying science to join Hizb on 15 March 2015. Sauleh was one of the close aides of the then Hizb commander, Burhan Wani, and Zakir Musa. After Musa formed the AGH, Sauleh followed him to join and become the Deputy Commander.

Since 1988, when the armed militancy started in Kashmir, there has been nothing major delivered by the current alternative political system – an umbrella of dozens of groups. For youth, status-quo and the rhetorical politics is tiring; thus, they find agency and space in Musa’s ideology.

The major challenge for the government is now to handle the spillover impact of Musa’s killing. His death doesn’t end what he followed – or his path. In just two years of him being active as AGH head, he has created an army of followers, if not armed recruits, across the Valley – whose job is to continue his path. It was visible how these young boys were picking a fist of blood-drenched soil from the spot where Musa was killed in the courtyard of the two-storey house at around 6am after a gun battle for eleven hours on 24 May 2019.

If Musa is not Burhan Wani that there will be rise in militancy recruitment, but there will be growing intensity of his ideology. To be against status-quo and lead an indigenous movement for the establishment of Khilafat will continue to have takers in the region – and when the other paths have failed to fulfill the expectations of people, this many turn out to be the only way forward.

It must be seen how the state will tackle what I call ‘unknown Zakir Musas’, present in every corner of the Valley – keeping alive what the ameer left behind by setting an example in his final years of life. These will be the same youth – who walked dozens of miles overnight and at his funeral echoed the slogans: ‘Musa! Musa!’.

The author can be followed at @pzfahad