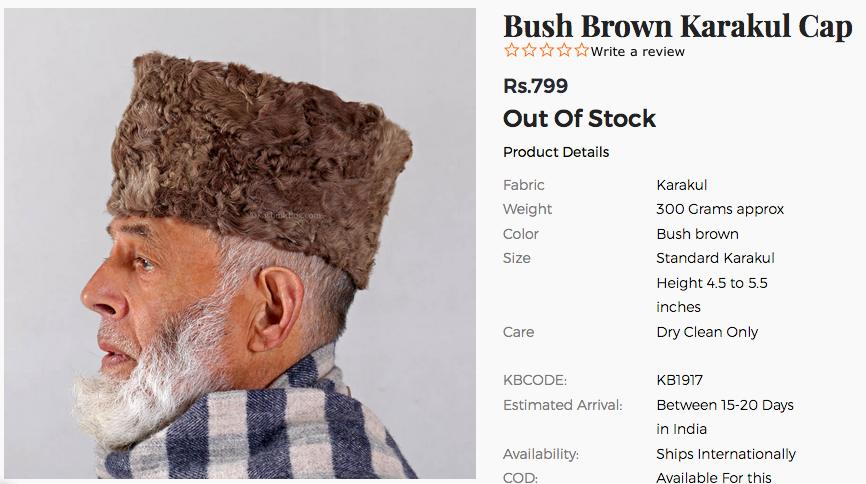 Karakul Caps, the crown of a gentleman, has walked across the long power corridors of central and south Asia to the heads of common people in the crowd. It has always been spotted on the top of Muhammad Ali Jinnah, founder of Pakistan, while the other times on the narrow lanes of the Kashmir valley. Being the honor of Indo-Aryan descent from Nepal, Karakul hats have also seen the communist air through the Politburo members of USSR. Through its rich journey across the continents, the hat gained numerous colloquial synonyms like Jinnah cap, Dhaka-topi and even Rampuri.

But what led the Kashmir Box (KB), a Valley-based e-commerce giant, to stop trading the historical hat?

A week back, KB members traveled a few hundred kilometers away from the summer capital of Jammu and Kashmir – Srinagar, to the foothills of the Himalayas where an old yet highly skillful man, commonly known as ‘Abba’, is producing the Karakul caps in his matchbox sized workshop.

With a few sips of tea with the KB members, Abba opened his vocals and said, “I was just 17 when I learnt the art of stitching Karakul caps. The craft has always been on the pinnacle of glory as far as I remember. In the olden times, only the elite could have afforded the Karakul.”

As Abba narrated, for all the time the hat was more than just an accessory; it was a symbol of status, pride, honor and dignity.

As the hours passed, KB members went on to see the infamous process behind the making of this piece of luxury. As it came, they were stunned.

The breed of sheep, Qarakul, used in the manufacture of Karakul caps is entirely different. Anciently, they were found in Bukhara, Afghanistan. Infant Qarakuls’ is very attractive to look at. But in a few days, the curls get unfurled and rough. So the wool has to be skinned off before that the infants get old.

Therefore, a pregnant ewe has to be slaughtered, her stomach slashed wide so that a worker can remove the fetus. The fetus is then skinned and this skin becomes the raw material for the grand Karakul cap.

Two local workers accompanied the KB in the slaughter-house. The bloody place, as they call it. All barren and in the worst of conditions, the slaughterhouse was displaying a long history of in-humaneness. A guy holding the pregnant ewe from the front and back, ready to be slaughtered. The ewe was dropped onto the floor, mercilessly, whilst she kept on squirming in agony, kicking her legs, but all in vain. One worker controlled her body by stepping on it with his foot, perhaps to make her realize that this is the end for her.

The butcher slit ewe’s throat with a long knife while she kept wriggling; her legs continuing to kick with eventually the movements slowing down. A stream of blood flowed down the floor. The butcher twisted her head till it detached from the body. The dead ewe was now taken and placed over a wooden structure.

A living fetus was still alive and kicking, inside the dead ewe. The workers keep punching the ewe’s abdomen until the fetus died. Soon the workers started to skin the sheep, and moments later tore apart the uterus to pull out the fetus.

The wool was now ready to be skinned off for the luxurious Karakul cap; the cap which had seen the century evolving.

The KB team left the place with a heavy heart and a thought of raising their slice of rice. The matter was finally taken to the KB management and a collective decision was taken to cease the selling of Karakul caps. The orders from customers were cancelled. The stock was returned.

Muheet Mehraj, CEO of Kashmir Box told The Kashmir Walla, “We have created a platform with social impact, which is good for the society. We have some core values, which is not only in our product policies but in our DNA. We are a business with a heart and the process of making Karakul Caps is inhumane and that is what prompted us to stop selling it.”

Kashmir Box has recently raised an investment to expand their business in the valley. “We are building a billion dollar business out of the valley,” said Mehraj.

In the meantime, many Karakul artisans have come up with fashionable and traditional replacements to the luxury cap. These alternatives include Kani print caps, Afghan styled Pakol caps, artisan made golf caps, anchored woolen caps and more, but apparently failed at bringing them to match the scale and status of a Karakul.

And the name Karakul was displayed unavailable on the site of Kashmir Box, forever.