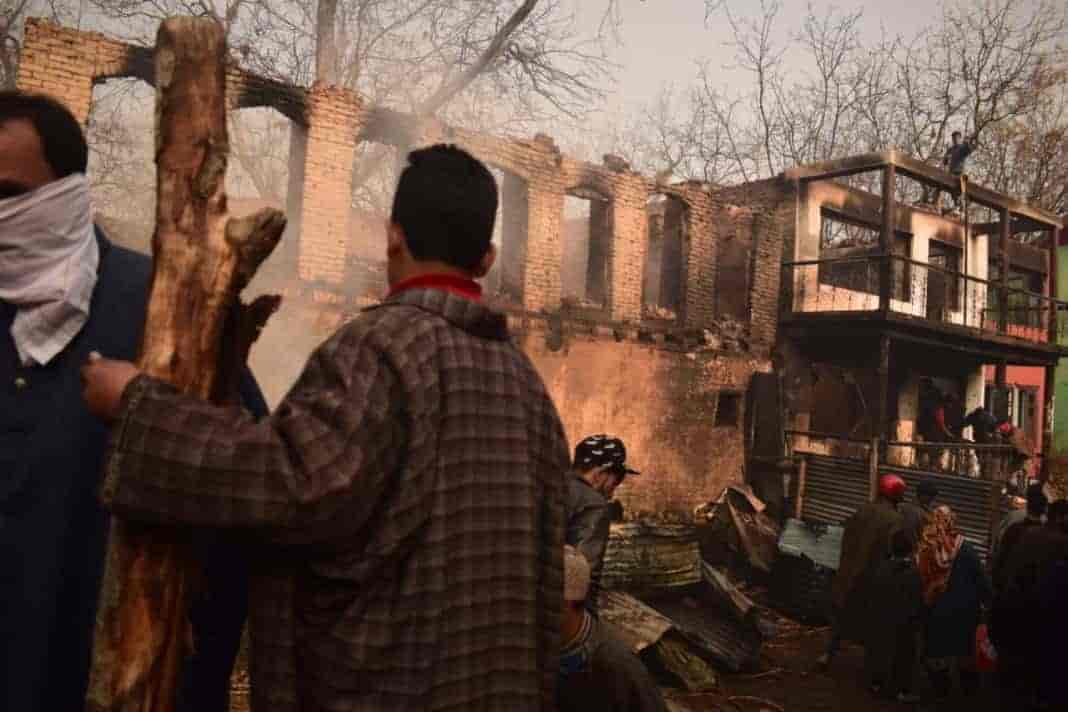 People gathering at the gunfight site in Kapren village of Shopian district in South Kashmir. Photograph by Bhat Burhan

“Dear brother, see what is happening in our Kashmir. It is the time to do something for my land,” said 16-year-old Numan Bhat. “I’m thinking of joining militant ranks very soon.”

As narrated by his cousin, 14-year-old Aakash had this conversation with Bhat fourteen days ago. He died last Sunday.

Bhat, a class 10 student, was a resident of Balsoo village of South Kashmir’s Kulgam district. He left his home at dawn with an empty stomach, to see the glimpse of the gunfight site in Kapren, where six militants were believed to be trapped. Like others, he too walked with two of his friends for the village after the news of encounter in the village went around.

As per eye-witnesses, the site was thronged by locals, mostly youth. Horrific scenes shed the dark shadow across the village; people running in fear, covering their heads with arms in order to not become a victim of countless bullets fired by the government forces.

Bhat, the eldest son of the family, couldn’t run for long. One of the showering bullets got him in the chest, leaving him silent for the lifetime.

His perforated body returned home – eyes closed and idea dead. His mother bent over his cold body – mouth still half-open – she wailed, “Ye kya kureth Khudayo, Numan souba thud wath Numan souboo” (Oh! my Allah, what did you do to me? Get up Numan, get up!”

Soon, the green flag wrapped his body, and people carried him towards the final destination. Pro-freedom slogans cleared the way amid the screaming crowd.

Bhat finished his practical exams for class 10 on Saturday. He stayed home and played with cousins till morning. “He was not mature enough to decide between right and wrong,” said one of his relatives. “These forces hardly spare them. They target our brothers.”

His mother Naaza Bano, 45, wearing blue Pheran was sitting outside the balcony of their house with women mourners, crying for her eldest son. “I was not at home. I was at my parents’ home as my father had passed away fifteen days before,” she said. She came home after she heard about her son’s martyrdom. “I never saw this tragedy coming my home.”

Bhat was declared dead at the district hospital by the doctors. Hue and cry were all that one could hear when the ambulance got his body home.

“We heard that he received a bullet in his leg and we need to donate blood for him. But soon, everyone said that he got martyred,” said his cousin Aakash.

The exchange of fire between the government forces and trapped militants started around 1am in the Kapren village of Shopian district of South Kashmir. The place is about 10 kilometers away from Bhat’s house in Balsoo.

A family dreamed to overcome their sufferings

Mohammad Ashraf Bhat, 50, father of Bhat is a carpenter by profession and had gone out to collect his wages when he heard about his son.

The family expected him to guide his younger brothers. His father always dreamt of the time when his son would help him pay the bills. “Their financial condition is not good. He is a labor and is struggling to meet the ends. We were dreaming that after some time his son will help him,” said a neighbor, Mushtaq Ahmad. He sobbed and continued, “But this will remain a dream now.”