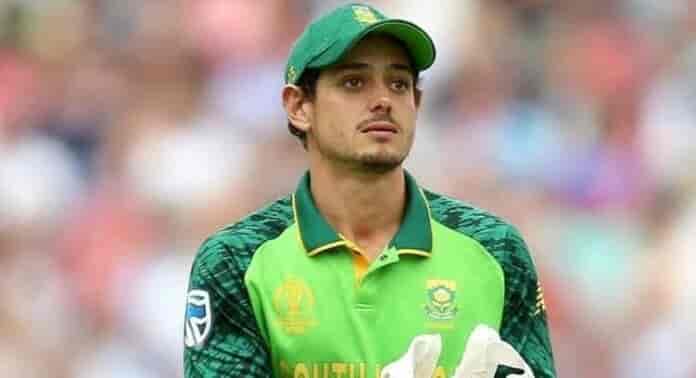 Quinton de Kock the South African captain has said that side is “calmer” since seeing the heavy security in Pakistan, stating that “it’s something to be seen”, News 24 reported.

De Kock’s side arrived in the sub-continent on a hastily-arranged charter flight on Saturday and were ushered through the streets of Karachi with heavy state security.

Former Pakistan captain and now Prime Minister Imran Khan has granted the Proteas “state guest level security” with reportedly 500 personnel of the paramilitary rangers on duty with the Proteas throughout their tour.

Speaking to reporters on Monday, De Kock said that security concerns were quelled after seeing the security force operate.

“Before we got here the security was a major concern – if not the biggest concern – but when we arrived here and saw the extent of the security that is here, the guys were a lot more comfortable and calmer,” De Kock said.

“Obviously, it looks like all bases are covered – touch wood – but at the moment we feel safe. For now, we’re just worrying about cricket. Over the days, it (the security) has become less of a worry.

“When we landed, we saw the amount of security … it’s something to be seen. The measures that they’ve taken makes us feel comfortable to focus on our cricket and not be worried about security.”

International cricket in Pakistan was put on hold in 2009 after gunmen attacked the Sri Lankan team bus during the second Test in Lahore.

Pakistan has gradually hosted teams again in the last five years before Test cricket was revived in late 2019.

Proteas batsman Faf du Plessis is the only player in the 21-man squad that has played in Pakistan before. Du Plessis recently made his Pakistan Super League debut last year in Karachi.

De Kock acknowledged that while this will be new territory for the Proteas, he believes they’ll find their feet as they adapt to conditions.

“It’s still new and we’re taking it all in,” said De Kock.

“We’re still trying to get used to everything here, we had a couple of net sessions and the conditions are lot different to what we faced from other places around the world. So that’s why we came early, to find our feet and get comfortable as quick as we can, start getting match ready.”

De Kock insists that he and the side will start to get more amped to play Test cricket ahead of the opening Test on 26 January in Karachi.

“We all knew about the nerves coming here and now it’s a reality. I’m sure the more we get settled, the more excited we will be to play,” he said.

“We’ve heard some good things about Pakistan in the past and I’m sure as the tour goes on, we’ll start getting more excited and amped to play cricket.”

This is Proteas’ first visit to Pakistan since 2007 when they defeated the hosts the by 160 runs in Karachi to clinch the series 1-0. The subsequent series in 2010 and 2013 were played in the United Arab Emirates.