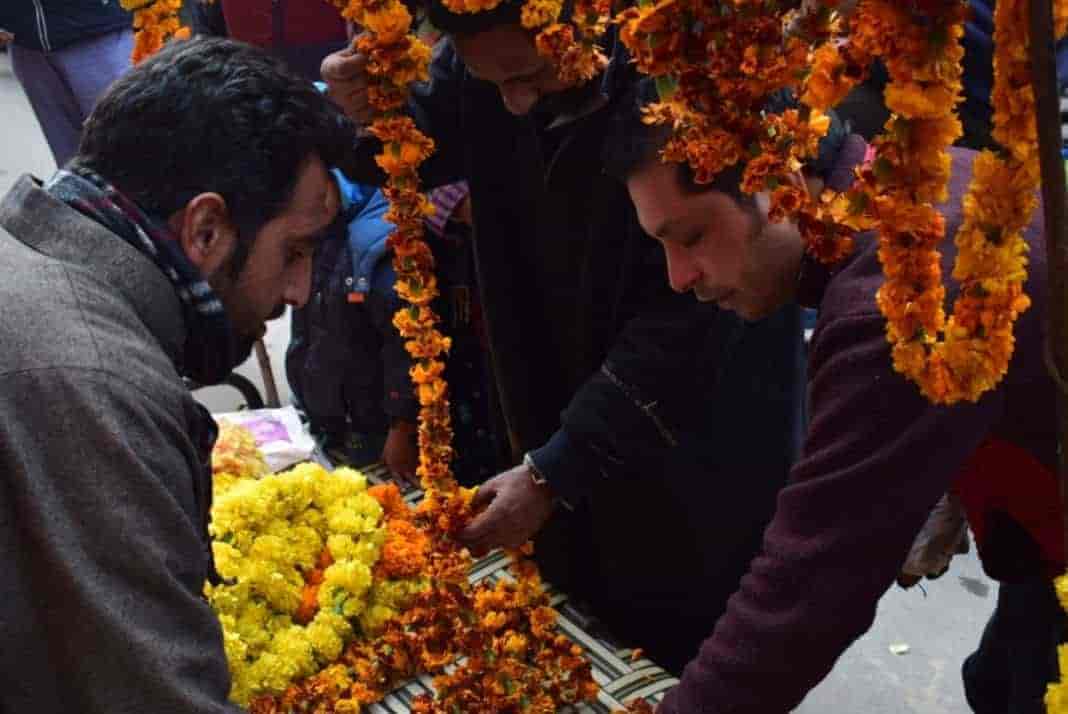 Mushtaq Ahmad Kumar, 40, selling Diyas outside a temple in Srinagar city on the day of Diwali. Photograph by Bhat Burhan for The Kashmir Walla

Like other places across the globe, Diwali, an auspicious day for the Hindu community, in Kashmir was celebrated with supreme zeal and zest. Alike other festivals, people put their best foot forward when it comes to dressing and indulge in sumptuous fineness.

Mushtaq Ahmad Kumar, 40, a resident of Rainawari, Srinagar, has set up a temporary cart to sell Diyas (clay oil lamps), outside the temple in Lal Chowk area of Srinagar city, for the last five days. Kumar has been associated with this business for the last thirty years.

Every year, he sells thousands of Diyas during Diwali. “I like to sell Diyas. Customers usually don’t do bargaining, and that saves the time,” he said while addressing a few customers. “I feel happy for selling Diyas every year to these people. If a person gets happiness in practicing his/her religious faith, I feel honored.”

Though, the Kashmiri Pandits do not celebrate this festival with great enthusiasm, as they follow Shivaism – following the Hindu God Shiva, in particular. Yet they perform Puja or prayers on this day.

Diwali is called the “Festival of Lights” and is celebrated to honor Hindu God Lord Rama. It is believed that on this day Lord Rama returned to his native place, Ayodhya, after 14 years of exile, during which he fought and won a battle against the Ravana.

As per the 2011 data, in Jammu and Kashmir, 68.3 percent of the population is Muslims, while 28.4 percent are Hindus; Sikhs are 1.9 percent, Buddhists are 0.9 percent and Christians are 0.3 percent. In the Valley, over 96.4 percent population is Muslims, followed by Hindus and Sikhs. However, in the early 1990s, when the armed militancy started in Kashmir, over 90,000 Kashmiri Pandits migrated from the Valley to Jammu division, living a life of migrants.

ALSO READ: “Why unpack? We will return soon”

In the politically volatile and Muslim majority Kashmir valley, the politics, and the ongoing situation hasn’t had any adverse impact on the family of Amit Arora, who has been living here for the past twelve years. The family has been celebrating and enjoying Diwali and others festivals in their own way.

Arora, 41, a resident of Jammu has been living with his wife and two children in Shivpora area of Srinagar city. “I got a phone call in the morning from my neighbor Abdul Majeed, who greeted me Happy Diwali,” said Arora, at the Hanuman temple in Lal Chowk.

For him, celebrating Diwali here does not make any difference; it is the same as it used to be back in Jammu. “We are celebrating Eid and Diwali equally,” said Kalpana, 40, his wife. “Muslim families come to wish us and vice versa. Their children lit firecrackers with us during Diwali in the evening.”

Avoiding the busy alleys of Srinagar city and entering the Hanuman temple is a complete bliss for the devotees. In the temple lane, people from different areas were seen purchasing candles, firecrackers, lamps, and sweets.

Inside the temple, Mahant Ganeyta, 48, a native of Haridwar, has spent eighteen years in the service of the temple as a priest. “I have not seen any problem or any untoward incident in all these years here for my religious duties,” said Ganeyta.

The temple is situated in a volatile area where stone-throwing incidents are common and often the area remains deserted during shutdowns. But, according to Ganeyta, he has never witnessed anything against his faith or the temple. “Though there are security forces on the first floor of the Mandir and outside as well, but we were never targeted,” he added with confidence.

On the outer wall of the temple, posters of Hindu Gods were twinkling under the colorful lights. Mohammad Maqbool, 35, who sells flowers outside the temple, with the warm smile, was handing a colorful garland to a family entering the temple for puja.