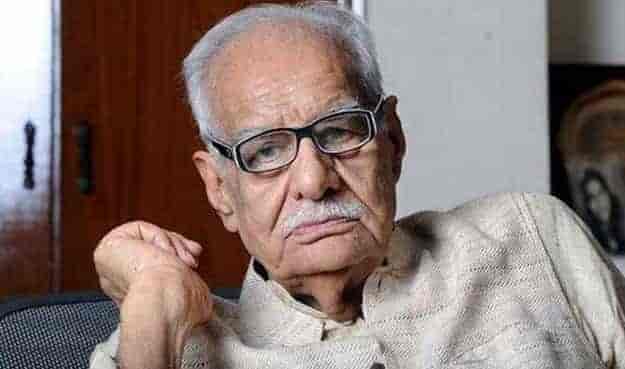 Veteran Indian journalist Kuldip Nayyar passed away on Thursday at a hospital in Delhi. He was 95 years old.

He served as the High commissioner of India to the United Kingdom in 1990 and was also nominated as a Member of the Rajya Sabha in 1997.

Expressing his grief over Nayyar’s demise, Prime Minister Narendra Modi remembered him as “an intellectual giant”.

“Kuldip Nayar was an intellectual giant of our times. Frank and fearless in his views, his work spanned across many decades. His strong stand against the Emergency, public service and commitment to a better India will always be remembered. Saddened by his demise. My condolences,” the Prime Minister tweeted.

In 2015, Nayyar was honoured with ‘Lifetime Achievement Award’ at the eighth edition of the Ramnath Goenka Excellence awards for his contribution to the field of journalism.
He also wrote 15 books including ‘Emergency Retold’ and ‘India after Nehru’.

In the 1990s, when the armed rebellion started in Kashmir Valley, he was sent to the valley to assess the situation, the details of which he writes in his memoir.