US Prez warns Iran of “1,000 times greater” retaliation in case of attack 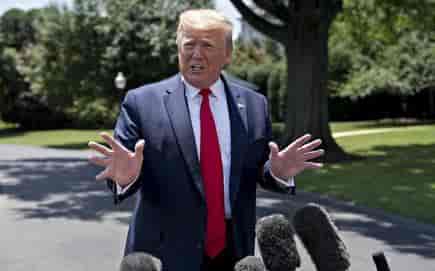 President Donald Trump has warned Iran that any attack against the US would be retaliated with “1,000 times greater in magnitude” after media reports that Tehran is planning to avenge the killing of top general Qasem Soleimani in January, reported Press Trust of India (PTI).

The death of Gen Soleimani, head of Iran’s elite Quds Force, in a US airstrike near Baghdad’s airport marks a major escalation in the standoff between Washington and Tehran, since US President Trump withdrew from the 2015 nuclear deal and imposed crippling sanctions.

Iran had vowed to seek revenge for Gen Soleimani’s killing.

“Any attack by Iran, in any form, against the United States will be met with an attack on Iran that will be 1,000 times greater in magnitude!” Trump said in a tweet after news reports emerged that Iran is planning some kind of attack against the US.

“Iran may be planning an assassination or other attack, against the US in retaliation for the killing of terrorist leader Soleimani, which was carried out for his planning a future attack, murdering US Troops, and the death & suffering caused over so many years,” Trump wrote.

In a news report based on unnamed intelligence sources, the Politico said “the Iranian government is weighing an assassination attempt against the American ambassador to South Africa Lana Marks.

If carried out, it could dramatically ratchet up already serious tensions between the US and Iran and create enormous pressure on Mr. Trump to strike back possibly in the middle of a tense election season, the American news outlet said.

Iranian Foreign Ministry spokesman Saeed Khatibzadeh said in a statement that the assassination allegations were part of ongoing anti-Iranian propaganda by the Americans ahead of the elections scheduled for 3 November.

Meanwhile, reacting on the reports South Africa’s State Security Agency (SSA) said that it has “noted the rising public interest on the matter and would like to assure all South African citizens and interested parties that the matter is receiving the necessary attention.”

The agency is interacting with all relevant partners both in the country and abroad, to ensure that no harm will be suffered by the US Ambassador, including any other Diplomatic Officials inside the borders of our country, it said in a statement.

The Minister of State Security, Ayanda Dlodlo has affirmed that South Africa has a duty to protect maximally, all diplomatic officials who are on state duty in the country.

Ms. Marks, 66, who was sworn in as U.S. ambassador in October last year, has been a close associate of President Trump for almost two decades. She was born in South Africa.