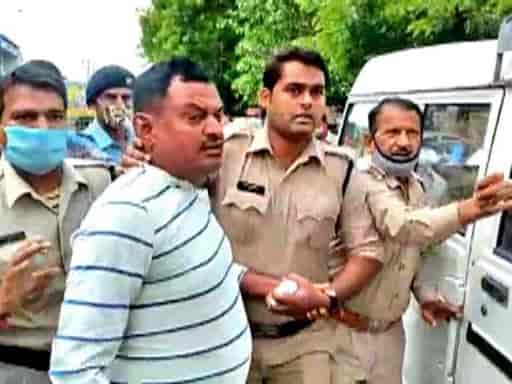 Gangster Vikas Dubey was shot dead on Friday morning allegedly in an exchange of fires with the police while being brought to Uttar Pradesh from Ujjain in Madhya Pradesh, claimed Uttar Pradesh police in Kanpur.

He was accused of shooting eight policemen in Kanpur’s Bikru village last week. In the last 30 years, there were 62 criminal cases against Mr. Dubey in Uttar Pradesh, including five cases of murder and eight cases of attempt to murder.

According to the police, the vehicle in which the accused was being taken overturned following heavy rains near Bhaunti in Kanpur.

Anil Kumar, superintendent of police, Kanpur, told a news channel that Mr. Dubey took advantage of the situation and was killed in “self-defense” by the police. “Vikas Dubey tried to run after snatching a pistol of an injured policeman. The police surrounded him from all four sides and tried to make him surrender, but he fired at the police. In self-defense, police fired two bullets [at Dubey] injuring him,” said Mr. Kumar.

The Senior Superintendent of Police told the media that four policemen along with Mr. Dubey was also injured at the site of the incident.

Five of Mr. Dubey’s aides had been previously killed in the past few days. Two of his accomplices were shot dead hours before his arrest in Uttar Pradesh in two separate encounters.