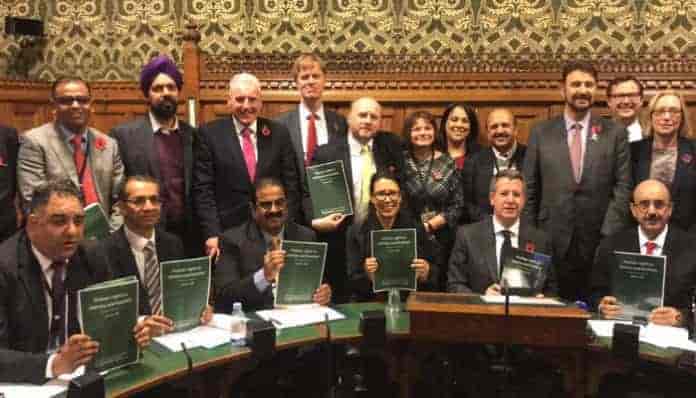 The All-Party Parliamentary Kashmir Group (APPKG) in the  Parliament of United Kingdom has condemned Indian government for using excessive force against Kashmiris and refusing to allow independent observes from Britain to enter into  Kashmir to monitor the true scale of human rights tragedy, The News reported.

Chair of the All-Party Parliamentary Kashmir Group, labour MP Chris Leslie, launched the report on Tuesday evening in the British parliament, accompanied by dozens of MPs from both Labour and Conservatives and Sardar Masood Khan, the President of Pakistan administered  Kashmir. The APPG on Kashmir comprises of more than 70 parliamentarians from the House of Commons and House of Lords.

The release of this report is seen as second big break through after United Nations High Commissioner for Human Rights (OCHR) report on Kashmir in June 2018 highlting human rights violations in Indian occupied Kashmir.

The report noted in the beginning that “repeated requests notwithstanding, no representative of either Indian central government or the J&K state government has agreed to give evidence, verbally or in writing”.

The report has proposed a number of recommendations to alleviate the sufferings of Kashmiris. It recommended that the Government of India must repeal the Armed Forces (Jammu and Kashmir) Special Powers Act 1990 and enable prosecution of armed forces and security personnel in the civilian judicial system; the Government of Jammu and Kashmir must urgently provide a strict and limited statutory basis for administrative detention powers, in line with international legal principles, by repealing or amending the Public Safety Act 1978; the Government of India must initiate a comprehensive public investigation into the identities of bodies in mass and unmarked graves, with an independent forensic verification process, and provide for a full freedom of information mechanism for the families of suspected victims of enforced disappearance ; the Government of India should immediately ban the use of pellet firing shotguns ; the Government of occupied Jammu and Kashmir must open its prisons to international inspection.; and the Governments of India and Pakistan should work to resume regularised visa-regulated civilian travel across the Line of Control and reunite separated families.

The APPKG report made reference to a Human Rights Watch commentary on conditions in Kashmir in March 2018 which had stressed that Indian occupation forces use brutal force against protestors. “Though protests in Kashmir can be violent at times, the response of the security forces should always be proportionate. Lethal force should be the last resort, used only when lives are threatened. Promptly investigating allegations of abuses and prosecuting those responsible is key to resolving this “mess”’.

The APPKG said it has considered a number of well-evidenced submissions alleging forced disappearances in Kashmir. The report noted: “Use of pellets Armed security personnel in J&K have rightly drawn condemnation for the use rubber and steel pellet-firing shotguns as a primary means of crowd dispersal, including to break up non-violent protests. Heartbreaking images of Kashmiri civilians disfigured as a result of injuries sustained by pellet fire – and in several dozen cases, permanently blinded – have come uniquely to emblematize the disregard for human life which too often characterizes policing tactics in J&K. Such pellet-firing weaponry is not just liable to disfigure its victims; it is also massively inaccurate.”

The report said that during the visit by committee members to Pakistan administered Kashmir and the Line of Control, its members heard from a series of witnesses including Raja Najabat Hussain, Chair of Jammu and Kashmir Solidarity Movement.

The report informed that the delegation had met dozens of Kashmiris who have fled Indian occupation to Azad Kashmir; women and women who have lost loved ones; victims across the LoC who told the delegation how Indian targets them daily; and victims who told how heavily militarised their homes are in Indian occupied Kashmir.

The APPKG delegation visited the refugee camp at Thotha, near Muzzafarabad, and heard first-hand from those whose families have been split apart in some cases for several decades between the Indian-held and Azad Kashmir. “We heard from families, principally women and children, now in supported accommodation provided by the AJK Government, who have either fled or been displaced from the Indian administered areas,” it said.

The APPKG delegation was allowed access to the crossing point at Chakothi at the Line of Control on the Azad Kashmir side, where the level of fortification and nature of the division was self-evident. “We heard about the scale and resources behind the militarisation of both sides of the Line of Control, and the alleged one-soldierper-12-population ratio of military personnel on the Indian-administered side. The delegation heard from four villagers living in the vicinity of the border, including from the son of a man killed in August 2018 by a mortar strike seemingly visited on their property at random; many witnesses testified to the arbitrariness of such attacks, such that their primary effect – and by design – is to maintain a climate of fear. The delegation also heard from a farmer who was the victim of a sniper attack, shot through the cheek and arm while tending to his land the previous month. These first-hand accounts were compelling and credible. They seemed to confirm that there are recent and ongoing Indian incidents affecting civilians across the LOC,” said the report.

The report concluded: “In the meantime, we offer this report as our contribution to the debate on the need for human rights to respected, especially on the Indian-administered side. Far too many innocent lives have been lost already; far too many lives are blighted now. This is intolerable; it must end.”

Previous article“Mother, I don’t know why but I’m not scared though I’m facing death”
Next articleForces launch CASO in Baramulla village