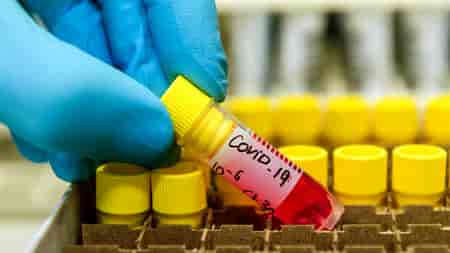 Srinagar : J&K reported its fourth death from the COVID-19 pandemic as a 61-year-old woman from Udhampur district of Jammu division died of the dreaded disease on Wednesday.

The woman died at Government Medical College Jammu at around 1:30 hours. The doctors had taken her samples early morning, soon after she was admitted to GMC Jammu after complaining of chest pain.

The body of the sexagenarian, who according to his son was a chronic arthritis patient from the last 38 years, was kept at the mortuary of the hospital, awaiting test reports for the coronavirus. “Her report was received at around 10:15 p.m.,” a senior government officer said.

As she complained of severe chest pain, the family had initially taken the woman to a local hospital in Udhampur where doctors advised the family to approach GMC. “When doctors told her that her sample is being taken for coronavirus, she collapsed and died,” her son told.

As the test report has returned positive for coronavirus, a senior doctor at GMC told that the woman’s body would now be handed over to the family after following established protocol. The woman’s death is the first fatality due to the COVID-19 in Jammu division and 4th in J&K as three earlier victims were from Kashmir Valley including a 67-year-old man from Hyderpora and two others were residents of north Kashmir—one each from Baramulla and Bandipora districts.

The deceased woman’s case has also taken the overall tally of COVID-19 patients in the J&K to 159—128 in Kashmir and 31 in Jammu.

In the highest single-day spike in COVID-19 cases as many as 33 test reports returned positive for the disease earlier.

“Thirty-three new cases were detected today. Out of this, 30 were in the Kashmir division and three in the Jammu division,” Principal Secretary Information and government spokesman Rohit Kansal said.

Among the fresh cases, 11 tests were confirmed at SKIMS Soura, 19 at Chest Disease hospital and three at Jammu.

A senior doctor told that reports of over 100 samples, received from JLNM hospital Rainwari, District Hospital Pulwama and GMC Anantnag were tested at CD lab and their reports were received today.

“19 of them came out to be positive,” the doctor said.

Among these 19, the doctor said ten were from Srinagar—3 from Chattabal, 2 from Safakadal and five from Eidgah areas of Srinagar while nine are the south Kashmir’s districts of Shopian (8) and Kulgam (1).

Regarding five Eidgah cases, sources said all of them are from a single family including a 56-year-old man, his 54-year-old wife, and their two daughters—one 24-year-old and another 20-year-old besides 28-year-old son. They have no travel history and are said to be contacts of a 10-year-old who contracted disease last month by hugging a COVID-19 patient.

Regarding 5 other cases, sources said they include 32-year-old and 46-year-old men from Safakadal, both have travel history to Nigeria, and three others are family members from Chattabal—60 year-old male and his 56-year-old wife besides 37-year-old son. who do not have any travel history to affected countries but are contacts of the previous COVID-19 patient. Others include eight persons from Shopian and have travel history to Maharashtra and New Delhi (all Tabligi related) while one is from 26-year-old from Kulgam.

Those who tested positive at SKIMS are said to be five residents of Srinagar, four from Bandipora and one each from Baramulla and Kupwara.

Regarding five patients from Srinagar, sources said they are from Hyderpora, Badamawari Hawal and Bemina with travel history to Nigeria and they are aged 33, 35, 31, 41 and 46 years old respectively.

Regarding four patients from Bandipora, they are said to have a history of contact with previous patients and are aged 16, 38, 30 and 36 years old respectively. They all are residents Saderkote Bala area of the northern Kashmir district.

One patient is from Tangmarg and he is said to be around 70 years and contact of the previous COVID-19 patient.

The other patient is said to 16-year-old from Kupwara who had returned from Nizamuddin New Delhi.

Two patients were discharged from SKIMS hospital after recovering from the disease, the officials said

While three patients have died, six have recovered till now, they said.

According to the daily Media Bulletin on novel coronavirus (Covid-19), government said 40336 travellers and persons in contact with suspected cases have been put under surveillance which include 8494 persons in home quarantine including facilities operated by government, 518 in Hospital Quarantine, 130 in hospital isolation and 23364 under home surveillance. Besides, 7830 persons have completed their 28-day surveillance period.

The Bulletin further said that till date 2269 samples have been sent for testing of which 2116 have tested as negative, and 14 reports are awaited till April 08, 2020.

It said that two more Covid-19 patients have recovered and have been discharged from SKIMS Soura, Srinagar today.

The general public is advised to avoid unnecessary visit to hospitals, in case anyone develops fever, cough and difficulty in breathing, seek medical advice promptly by calling on Covid-19 helpline numbers so that they can be provided correct medical advice and directed to the right health facility, if needed. (GNS)