Three days after death, body of BDO airlifted from Gurez to Bandipora 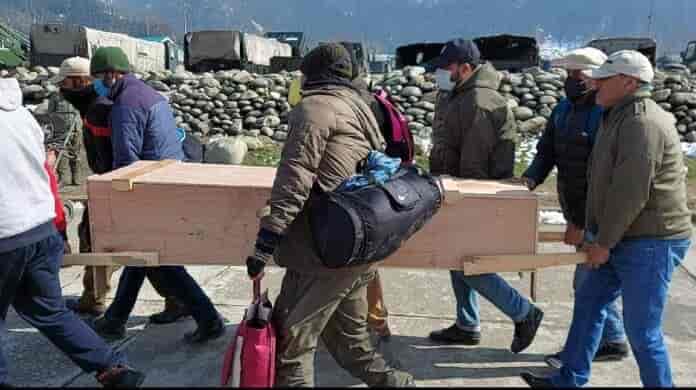 Three days after his death, body of a senior officer of Rural Development Department (RDD) who died while performing his duty in Tulail area of Gurez on Friday, was airlifted from Gurez on Sunday afternoon.

An official told the news agency—Kashmir news observer (KNO), that a Block Development Officer (BDO), identified as Abdul Saleem Darzi of Anantnag, posted at Tulail had suffered a massive cardiac arrest while he was on duty.

He said the officer was immediately shifted to a nearby hospital where doctors declared him dead on arrival, However, the body was not immediately airlifted from Gurez due to bad weather conditions.

The official said that the body was airlifted today via an army helicopter from Tulail to Sonerwani helipad, from where the body was taken to his ancestral home in an ambulance by the district administration.

Meanwhile, the locals from Gurez said that the government should understand the difficulties which people face there in the winter season.

“We have been begging the government for a long time to give us a tunnel but no one has considered our demand yet, ” Nazeer Ahmad a local said.

“If there would have been a tunnel, the body of this officer would have reached his ancestral home immediately but unfortunately, his family has been waiting for his body from the last two days,” he added.

Notably, Gurez is located 85 km from the district headquarter. It remains cut-off from the rest of the Valley during winter months due to accumulation on Bandipora-Gurez road—(KNO)