Those who are weak can never initiate peace: PM Modi in Leh 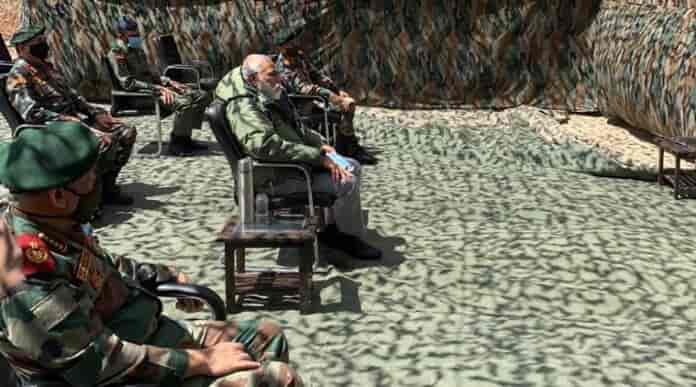 Prime Minister Narendra Modi on Friday said that bravery is a pre-requisite for peace and that those who are weak can never initiate peace, Indian Express reported.

He also said that the era of expansionism is over, and history is proof that expansionists have “either lost or were forced to turn back”.

Mr. Modi, who arrived this morning in Leh, Ladakh, to review the ongoing border conflict, said: “The age of expansionism is over, this is the age of development. History is witness that expansionist forces have either lost or were forced to turn back.”

The Prime Minister was meeting the soldiers who were injured in the violent Galwan clashes, as well as the local military leadership, when he made the remark. Twenty Indian Army personnel had lost their lives in the faceoff last month.

Mr. Modi was accompanied by Chief of Defence Staff General Bipin Rawat and Army Chief General MM Naravane, at Nimu and the trio interacted with Army, Air Force and ITBP personnel this morning.

Addressing the soldiers, Mr. Modi said: “Your courage is higher than the heights where you are posted today. When the safety of the country is in your hands, then there is a belief. Not only me, but the entire nation believes in you and is not worried. You inspire every citizen to work day and night. Our resolve for ‘Atmanirbhar Bharat’ (self-reliant India) has become stronger because of you and your strong resolve. The valor shown by you has shown India’s strength on the global front.”

He added: “India’s enemies have seen your fire and fury. Those who are weak can never initiate peace. Bravery is a pre-requisite for peace. Your will power is as strong and firm as Himalayas; the whole country is proud of you.”

Twenty Indian Army personnel had lost their lives in the faceoff in Galwan last month.