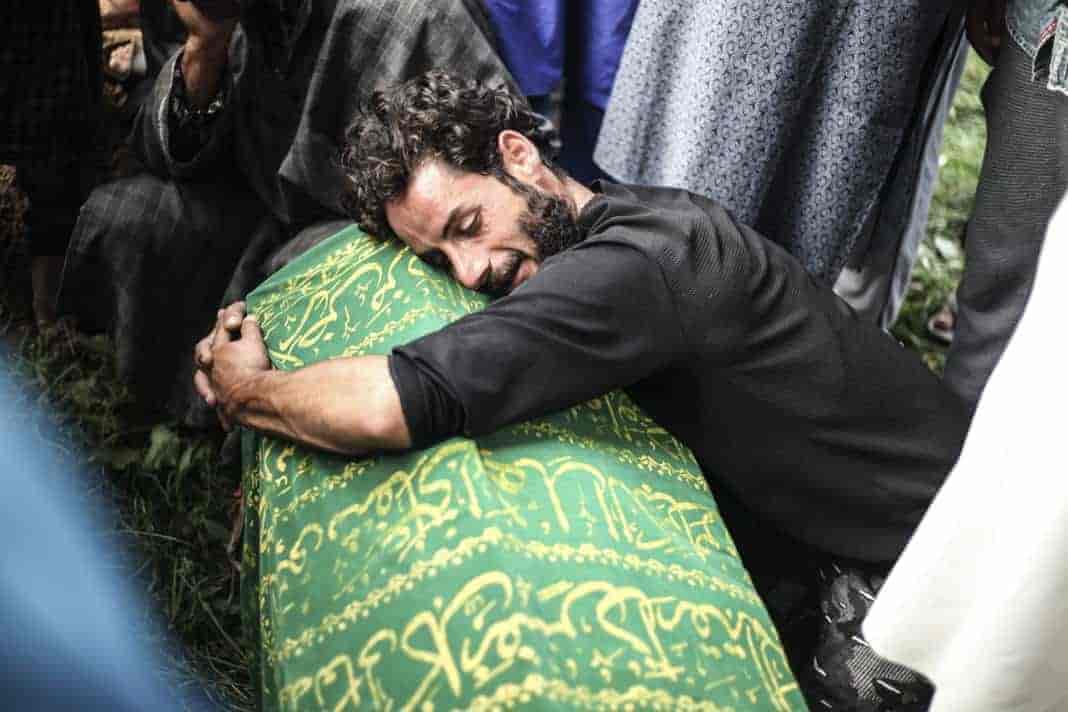 “One, who takes the venom – will die,” said 32-year-old Naseer Ahmad Rather to his brother Jahangir Ahmad Rather, 40, a few days before his killing. Elder one suggested his paramilitary forces’ personnel brother to quit his job due to the ongoing tense political situation in the Kashmir valley.

At 9:10pm of 29 July 2018, three militants barged into their Naier village residence of south Kashmir’s Pulwama district. They asked Wali Mohammad Rather, 60-year-old father, for overnight shelter. They also asked the family to keep vigil around the house.

“They were wearing Pheran (long cloaks) over jeans, had shining shoes, and were carrying AK-47 rifles. One of them was speaking in Kashmiri while the other two spoke in Urdu,” Neelofar Jan, wife of Naseer described the three militants, amid the wails at the home.

Leaving behind the labour work, Naseer got into Central Reserve Police Force (CRPF) in 2006. After training in Chhattisgarh, his first posting was in Nagpur. In Pulwama, his home district, he was serving in 182 Battalion of the CRPF’s control room section. After six years of his marriage with Neelofar, the couple has a five-year-old son, Ziyan Naseer, who had just joined school this year in Pulwama.

“Hurriedly, they asked us to serve the dinner,” she added. Rushing towards the kitchen, as Jan narrated, she served them food with shivering hands while Naseer performed his ablution for Isha prayers. As Naseer stepped out of the bathroom into the room, some voices from outside followed. One gunman pointed his finger towards the backside of the house and ordered in a heavy voice to checkout.

Back in the room, one of them asked Naseer to show them the escape routes in case of emergency. He obeyed and led them out, but his wife followed too into the lane outside of the house.

Taking him to the second lane, they shouted at the woman to go back but her feet didn’t stop. When she pleaded to one of them, and asked for her husband’s release, one of them pushed her to the wall and shot onto the ground, right next to her feet, as she narrates to the visitors now.

“They first hit him with gun butt on his head and then two others held him forcefully against one of our neighbor’s wall. Then they shot into his chest,” said Jan, adding that she fainted on seeing him shot.

Before Naseer was shot dead outside, a few girls in the house were drawing designs of henna on each other’s hands. “Hearing few abuses, we peeked through the window, only to see three gunmen and Naseer, with blood oozing out of his head. Gunshots followed. We were frightened and quiet,” said one of the girls, wishing to be anonymous.

Before the militants had entered into Naseer’s house in the night, they had taken cellphones and identity cards of two youth outside. “We were talking about things outside my house, when the three men asked us to hand over our phones and identity cards. They ordered us not to move, else will be killed,” recalled the two youth, Mudasir Ahmad and Khursheed Ahmad.

Jahangir Ahmad, brother of Naseer, was the first to run and see what had happened. “When I rushed outside, I saw my brother in a pool of blood. I shouted for my father and took him to the hospital, where he was declared dead by the doctors,” said Jahangir, looking at the picture of Naseer mounted on the wall, with teary eyes.

In the past few months, the killing spree of government forces associates’ have had a significant rise. It had also spread the fear in the families of such personnel as well. The militancy has been at rise with over 87 joining the ranks this year so far. Kashmir has been going through a violent phase for a few years now, leading to rising killings, including a large number of civilians too.

The younger brother believes that Naseer would have overpowered the militants earlier if he had any idea of the fatal danger. “He had a strong physic and was well trained. The intruders didn’t look like the militants. Usually, militants have an attractive fragrance of ittar (perfume) but they didn’t have it. They didn’t even take off their shoes when they sat in the room,” he added.

Surprisingly, no militant organization has claimed responsibility of Naseer’s killing so far.

The family of four sons and a daughter, the father has lived a hard life. But since last few years, Naseer got the job, the family have had a better economical backbone. Naseer had come home four day ago, after he had been transferred to Sanat Nagar in Srinagar. He was supposed to join the ranks next month. The sudden demise of Naseer has shook the villagers, who remember him as a respectful young man.

“He used to offer prayers five-times a day and had a friendly nature,” recalled Muzaffar Ahmad, Naseer’s childhood friend. “I never saw any fear in him because of his job or due to the situation of Kashmir. There was also a minor attack at his home in 2016 by some unknown people, who vandalized his house.”

Wailing for the immense loss, now a widow screamed, “You have come here to report my dear’s death, how can I narrate what my beloved was? What his appearance was like when he used to help me in farming and other activities? How can you know, who has been buried?”

“When they shot him, I couldn’t even shout,” the wife adds. “My whole world was shattered before my eyes. They put my beloved in a pool of blood without mercy.”