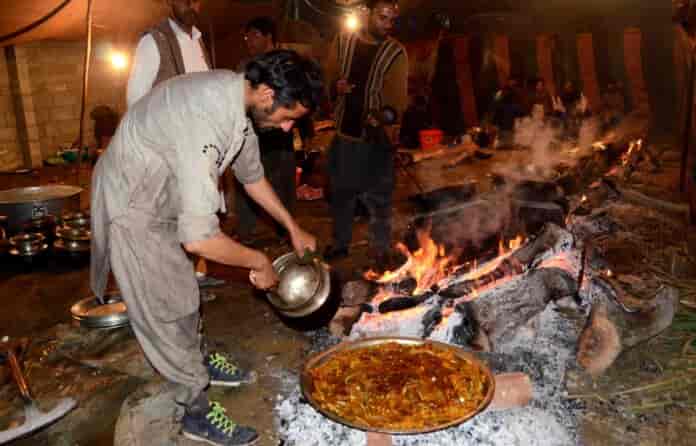 The clanking of the tasht and naer, portable basin and water vessel made of copper, is the cue for guests to arrange themselves in groups of four. A long white table cloth then parts the groups of four, who anticipate the arrival of the traem, a large plate also made of copper.

This sumptuous platter, however, is just the beginning.

Over the course of the hour, waz’a’s — as chefs are called in Kashmiri — make rounds through the tent seating the guests on carpets to serve more delicacies, largely mutton dishes, on each traem shared by four guests.

Traditionally the wazwan — derived from the words waz’a and waan that simply means a shop, has its roots in the cuisines of Iran and Central Asian countries — comprises seven dishes but over the years the feast has been stretched to serve thirty, mostly mutton, dishes.

No festivity is complete in Kashmir without the feast of wazwan — and its critique by the guests afterwards; largely complaints of the meat’s tenderness, or too much or too little salt or oil used to prepare the dishes.

The wazwan feast is almost exclusively cooked with lamb meat. Each part of the sheep, barring its testes and feet that are otherwise consumed, is used to prepare specific dishes as per the recipes.

The methimaaz is cooked in mutton stock, mild spices, and fenugreek leaves. For the tabakhmaaz, whole ribs are boiled with salt and garlic. They are then chopped into smaller pieces, that two guests split between them, and fried crispy brown.

Minutes after the last traem is served, the wazas dressed in traditional white kameez shalwar make rounds, topping up the plates with more delicacies. Though the idea is to alternate between strong and mild flavour profiles, there is no hard and fast rule.

The first dish to be served, however, is the rista, small meatballs cooked in mutton stock, mild spices like cardamom and cloves, garlic and Kashmiri chillies that add more colour than spice to the food. Each traem is topped by four ristas.

For the roganjosh medium chunks of meat from the sheep’s lower back are slow cooked in gravy. Besides the same mild spices used in the recipe for ristas, red chillies and saffron ground in water, and cockscomb flower extracts are used to give it a dark red color.

In the middle of the feast, the wazas arrive with vegetable-based dishes: the much loved large chunks of cheese cooked in thick tomato gravy, spinach and mushrooms or tiny chunks of boneless mutton.

The wazas then bring out the curd and milk-based gravy dishes. The aabgosh, a single large chunk of meat from the sheep’s lower back, is slow cooked to tenderness in milk and just the right amount of cloves sauteed in pure ghee are added to give it a sweet flavour.

Here, the waza challenges the guests’ taste buds by introducing the marchewangan korma, a dish made of smaller chunks of meat than used in roganjosh and cooked in a thick chilli gravy. By which point, the guests usually pack it in doggy bags given by the hosts.

The final dish to be served is the goshtab that is served as a single large meatball that the guests cut into four pieces. It is cooked in a gravy of yoghurt, pure ghee, mutton stock with assorted mild spices and garnished with dry mint leaves giving it a sweet and sour taste.

The preparations for the feast begin more than a day before the guests lift the sarposhs. A corner where the team of wazas set up shop, usually underneath a tent, the sound of more than two hundred kilogrammes of mutton being chopped, diced, and pounded resonates through the night for an average of more than a hundred guests.

The wazas are trained for years to learn the art of making the right cuts and grounding the meat to perfection. The different cuts of meat are then separated — each dish has a different recipe and requirement for the part of the sheep, the cut, and the texture of the meat and is slow cooked in separate large copper utensils over a fire for varying lengths of time.

Mohammad Shafi Khan, a second generation waza from the prominent Ahad family of chefs in downtown Srinagar, also began his career by learning the process of chopping the meat. Learning the art of making wazwan, he said, was as slow as the cooking process.

After the night-long preparations, the wazas have no time to lose. At the break of dawn, they get ready to begin cooking the meat. “The cooking starts early in the morning [on the day the feast is served] and the entire process takes around six hours,” said Khan.

Over the years, Khan has learnt that only about twenty pieces of mutton must be cooked in a single utensil for the roganjosh while the rista and goshtab require a delicate amount of fats for consistent texture and tenderness.

The aabgosh is another example of culinary craftsmanship. “Ten litres of pure cow milk are reduced to one and then mixed with the mutton,” Khan said, adding that the most difficult dish to cook, however, is the showstopper goshtab. “If the mutton is left idle and minced later, one can’t make goshtab.”

Influence of the Sufis

Most dishes of the wazwan — like the kababs, roganjosh, korma, gohstab, etc — derive their names from Persian. Its introduction to Kashmir is also attributed to the influx of Muslim saints from Iran and central Asia who spread the teachings of Islam.

“Islam was not introduced in Kashmir just as a religion but more like a culture,” said Mohammad Ashraf Wani, former history professor at the Kashmir University. “Along with the religion, these saints also introduced a variety of food, clothing and traditions in Kashmir… That is when many dishes of wazwan were introduced.”

In his book Shah-i-Hamdan aur Kashmir, Shams-ud-din Ahmad former Head of the Department of Persian at Kashmir University wrote about the life of
Sayeed Ameer Kabir Hamdani, the fourtheenth century sain credited with bringing Islam to Kahsmir.

In the far-off villages of Central Asia and Iran, four people used to sit and eat together and the same culture has been adapted by the people of Kashmir, he further wrote.

The people of Kashmir were taught to cook varieties of mutton dishes by Persian chefs including kabab, roganjosh, korma, yakhni, pulao, aabgosh, kofta and rista, he wrote. “Many people mastered cooking these delicacies and got involved in the profession of cooking and were later called as aashpaz or chefs,” he further wrote, and additionally noted that only a few of these dishes are today a part of Iranian and Central Asian cuisine including yakhni, pulao, aabgosh, kabab and murg.

The “modifications” to the cuisine over the years, Wani said, had turned it into “Kashmir’s own” even as its roots lie in Iran and Central Asia, where many dishes of the wazwan are still found. Kashmir’s wazwan has evolved its own distinctive character and is found only in Kashmir, said Wani. “Now wazwan is special and authentic to Kashmir and we won’t find dishes with equal taste even in Iran and Central Asia,” he said.

From its lavish yet simple seven dishes, the wazwan has evolved to incorporate luxury and emphasis on the guests served. About thirty dishes are now being served during the mahraz saal, literally the feast for the groom, on the night the marriage is solemnized, said Khan.

Khan added that the demands of the hosts have compelled the wazas to introduce alien dishes like badaam korma, mutton cooked with almonds; aaloo bukhara korma, mutton kebabs with apricot or plum fillings or simply mutton chunks with cooked the fruits; daniwal korma kokar, chicken prepared with coriander; and even chicken roganjosh.

The waazas continue to innovate and add new dishes to the feast. The wazwan is not merely the cuisine for festive occasions but it is also served during periods of mourning, albeit on a much smaller scale.

“When a famous waaz’e cooks at a wedding, the family puts its trust in him,” prominent food critic Marryam H Reshie observed of the significance of the feast in marriages and other festivities. “Even the waaz’e knows that he cannot put the family down.”

Reshie first tasted wazwan in 1988 and has since then relished authentic cuisine prepared by Kashmiri chefs and what is served in restaurants outside Kashmir, in mainland India. Her quest to explore food has led her to different parts of the world — including Iran and Central Asian nations.

During a ten-day-long expedition in Iran, and exploring the food at cities like Mashhad and Isfahan, Reshie realised that “nothing is comparable with the refined taste of wazwan.” Reshi is also an admirer of the zero wastage caused during the preparation of the multi-course meal during marriage functions.

The wazwan prepared by the traditional wazas requires all the pure ingredients including red chillies, dried, peeled and powdered in a mortar and pestle at home, said Reshie. “We use the same spices in cooking at our homes everyday but the wazas have their own technique.”

“Authentic wazwan is prepared using mutton stock but I am not even sure if that happens at restaurants nowadays,” said Reshie, adding that the wazwan served in restaurants “does not come anywhere close to the real taste.”

Reshie believes that the feast is best enjoyed when people sit together to share and eat from the same traem. “People who go to restaurants for having wazwan miss their home and want to have familiar food,” she said. “Otherwise one cannot experience authentic wazwan in Delhi or elsewhere.”

Relishing wazwan at weddings is accorded cultural significance and has become a status symbol in the Kashmiri society — the taste is remembered and recalled as an achievement even years later. “If people remember the taste even after all these years, what else do we need,” said Reshie, who is married to a Kashmiri and lives in Srinagar.

Reshie believes that suitable innovations in the cuisine should be made in order to make progress rather than making mindless changes as “this is how the cuisine evolves” but the authentic “Wazwan cannot be taken out very easily from Kashmir.”

For Khan, preparing wazwan is a point of prestige as he believes that each dish requires proper time and attention. “When someone from outside comes to Kashmir, why do we serve wazwan?” he asked. “It is our identity.”