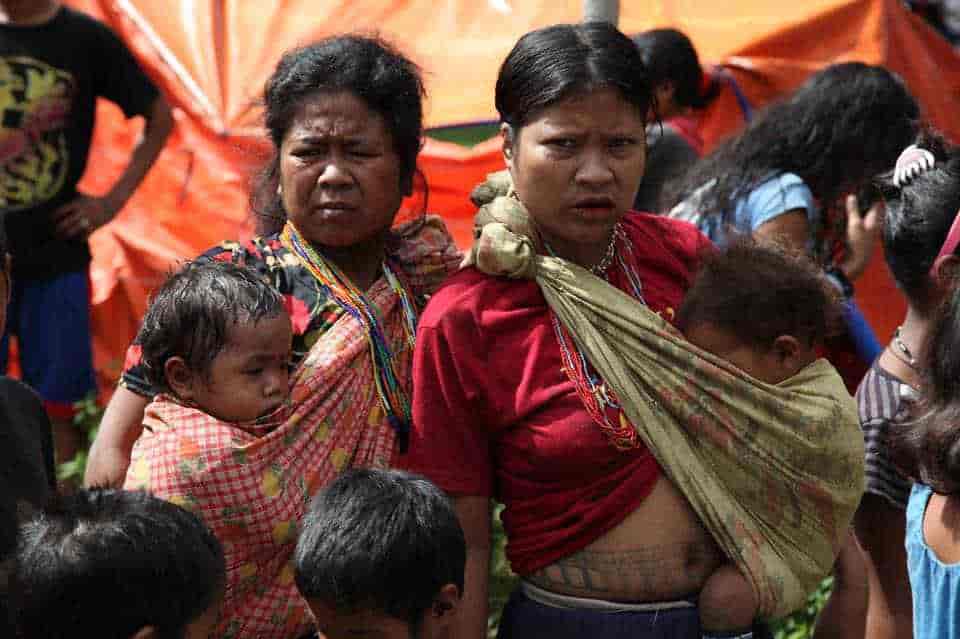 Touted as the ‘Land of Promise’ because of its rich natural resources, Mindanao is home to more than a half of the estimated mineral wealth in the Philippines, which amounts to an approximation of 12.6 Billion US Dollars. The ninth largest island in the world has the largest reserves of copper, gold, aluminum and iron, inviting the world’s biggest extractive industry players—BHP Billiton, Xstrata, Anglo-American, Sumitomo, Rio Tinto, Unocal, Exxon-Mobile and many others. In addition to rubber, Mindanao is the site of the largest pineapple plantations in the country.  Among the world’s largest, Del Monte Philippines and Dole Philippines’ pineapple plantations are spread out in the ancestral lands of the Lumads of Bukidnon and South Cotabato. The island also boasts 1 million hectares of grasslands that are gradually being turned into palm oil states.

Aside from a number of local and multi-national corporations running vast tracks of oil palm plantations, Mindanao has become the destination of big companies such as Malaysia’s Felda Global Ventures and Sime Darby, and Singapore’s Wilmar. As a result, indigenous communities have come head-to-head with big companies for access to the country’s resources. President Aquino III’s drive for mining liberalization, egged by the Chamber of Mines, has been accompanied by the establishment of Investment Defense Forces—a composite of soldiers and police—to ‘protect’ mining investments by militarizing communities inside the borders of a mining claim.

Philippine laws require the free, prior and informed consent (FPIC) of the local tribal communities for various investments to proceed. This often has divided indigenous communities, some of them backing investors with the support of the military to acquire the necessary permits, or create paramilitary groups to force the reluctant majority of the communities to submit, thus, creating numerous human rights abuses.

The summary execution, torture and other ‘minor’ human rights violations continue in Mindanao’s indigenous communities because of impunity. Impunity emerged because no perpetrators have been brought to justice. This is mainly due to the deficiency of human rights capacities of indigenous organizations and communities to seek reparation from courts. Additionally, there is also a lack of media attention, recognized for their capacity to set political and social agenda, to highlight attention on cases of violations. Even though the government constituted Units of Human Rights in the ranks of soldiers and police, a focal point for Human Rights Defenders in the Commission on Human Rights (CHR), the challenge of widespread and systematic impunity remains. Glut of laws and institutional mechanisms does not inspire confidence, more so for the Lumads bounded by traditional practices and discriminated historically.

Already robbed of the rights to their land through the bureaucracies of Philippine laws and extra-judicial threats, the Lumads are further dispossessed of what meager resources they have left when natural calamities strike. A small Higaonon community in Impasug-ong, Bukidnon had their houses built on steep slopes at the periphery of a large pineapple plantation, the crops given land priority by the local government. When the floods came, their houses (which were only tied to trees for support) were washed out. The silt from the plantations covered the vegetables they had planted nearby, which was the only means of income for many.

The Manobo-Pulangion community in Maramag, Bukidnon has seen the devastation a hydropower dam has brought them. Their lands flooded by the reservoir, the compensation promised them until now has been difficult to secure. They do not even benefit from the energy generated from the powerplant, many of the displaced families living around the lake still depend on candles and kerosene lamps at night.

Lumads are multiply victimized. Without the sacred forests their communities have traditionally conserved, their lands upturned and unfertile from mining, their self-sufficient communities have become dependent on what society throws their way.

Human rights violations and impunity in the Lumad areas of Mindanao

Twenty-eight killed in 35 months. This is Mindanao’s generous fraction of the 34 Indigenous Peoples extra-judicially killed in the country since Pres. Benigno Aquino III assumed power in June 2010. They were murdered in broad daylight, with witnesses who have consequently given testimonies. But nobody has been seriously persecuted, much less convicted, so far. The victims were traditional Lumad chieftains, leaders of indigenous community organizations and their immediate families, most of them resisting encroachment of their ancestral lands against extractive and destructive activities—foremost are large-scale mining, agribusiness plantations, and other so-called ‘development’ projects like mega hydro dams in Mindanao.

Even after the UN special rapporteurs on human rights defenders and on extra-judicial killings issued a joint statement on 9 July 2012 criticizing the Aquino III administration for the attacks on human rights and environmental defenders, especially in Mindanao, saying these abuses “have increased significantly over the past few months,”the killing of indigenous leaders is still unabated, and has even escalated”. Seven indigenous leaders and their children from Mindanao fell victim to another spate of EJKs in barely three months after the aforementioned joint statement.

This continued climate of impunity is apparent in the case of the indigenous communities of Dao, San Fernando in Bukidnon. Refusing to sign the Certificate of Ancestral Domain Title which will eventually facilitate the entry of large scale mining and agribusiness projects in their 52,000-ha Matigsalog territory, village chieftain and Kasilo vice-chairperson Jimmy Liguyon was killed in front of his family on 5 March 2012 by Alde Salusad and his pro-mining paramilitary group New Indigenous Peoples’ Army for Reform (NIPAR). Despite the interventions of international human rights organizations such as the Human Rights Watch and the World Organization Against Torture-OMCT and of various foreign consulates in the Philippines, including the European Union, the killings, torture and displacement of communities courtesy of NIPAR continue to now, and getting even more serious each time.

Across Mindanao where extractive industries are forceful, ‘minor’ human rights violations are notably soaring. In the North-eastern Mindanao Region—tagged as the ‘Mining Capital of the Philippines’, 37 Lumad leaders were slapped with fabricated charges in August 2011. Traversing the island, about a hundred other Lumad Human Rights Defenders (LHRDs) are facing fabricated and malicious charges, hindering them from carrying out their human rights work because of pending warrant of arrests, subpoenas, and other form of judicial harassment and intimidations.

Around 1,070 families encompassing 5,925 individuals—according to human rights group Karapatan—were displaced in the course of intense military operations carried out by the Philippine Army in the mining areas of Northern, North-eastern and Southern Mindanao in 2012. In indigenous communities where military detachments are set up in the heart of the villages, gatherings are strictly monitored, while leaders and community members are being ‘invited’ to the military camps for questioning.

The Lumads of Mindanao: Strangers in Their Own Land

The 18 Indigenous groups in Mindanao – Ata, Bagobo, Banwaon, B’laan, Bukidnon, Dibabawon, Higaonon, Mamanwa, Mandaya, Manguwangan, Manobo, Mansaka, Subanon, Tagakaolo, Tasaday, T’boli, Teduray, and Ubo are the Lumads of which the T’boli (pronounced “Tiboli”) and the B’laan are the two main Indigenous stewards of Mindanao. The characteristics of these groups are that they continue to live in a traditional way much as their ancestors lived centuries ago. They are distinguished by their culture, language and heritage very much visible in their clothing, ornaments, housing, cultural habits and religion.

Agriculture being their only source of income and food they practice farming and fishing and are highly dependent on the land to provide rice, yams and cassava. When the Spaniards could not convert them to Christianity and the Muslims to Islam, they fled the battles and left their lowland farming areas and proceeded to the highlands where they continued to practice animistic religions. Over the past decade they have suffered a great deal, they are economically poor and struggle against present day farmers (often landless) and corporations seeking their fertile lands, and natural resources.

They have experienced centuries of brutal and painful history in defending their lands. They have been subjected to and are ceaselessly going through a systematic policy of driving them out of Mindanao in which they are now a minority. In the beginning of the century they controlled 17 of Mindanao’s 24 provinces sadly they have been marginalized, with the right to self-determination denied and indigenous culture subdued. Beyond their territories, discrimination and exclusion confront them thereby narrowing their choices.

The recent escalating attacks are targeted against Datus (chiefs) and Baes (community elders) and leaders and members of community-based organizations in the indigenous communities of Mindanao. Acting as Lumad communities’ first line of defense in protecting ancestral lands, local natural resources and the environment, these Datus, Baes, and leaders and members of community-based organizations are aptly defined as “Human Rights Defenders” with their work falling under the definition in the Convention on Human Rights Defenders and recognized in the EU Guidelines on Human Rights.

But while the level of recognition for HRDs at the international level has increased, the space for them to work safely on the ground has shrunk significantly. In Mindanao, the LHRDs have been the victims of arbitrary arrests, torture and extra judicial killings. Indigenous organizations have been subjected to vilification, surveillance, harassment, and direct physical attacks as they defend lands and the environment from intrusion. Their basic right to life, liberty and security of person as enshrined in documents such as the UN Declaration of Human Rights and the International Covenant on Civil and Political Rights have been ignored. Needless to say, the assaults against LHRDs blow up the terror to a bigger extent, such that a culture of impunity has enveloped the indigenous communities of Mindanao today.

Without the LHRDs and community organizations fighting for their rights over lands, access to natural resources and the environment, and to their basic freedom such as their entitlement to say yes or no to projects through FPIC, the Lumads of Mindanao will be subjected to a repeated cycle of oppression and exploitation. They will remain as they are—easily intimidated, frightened, and coerced. The use of force to slaughter, maim and harass to subdue a civilian populace has no place in a nation that proclaims to be democratic.