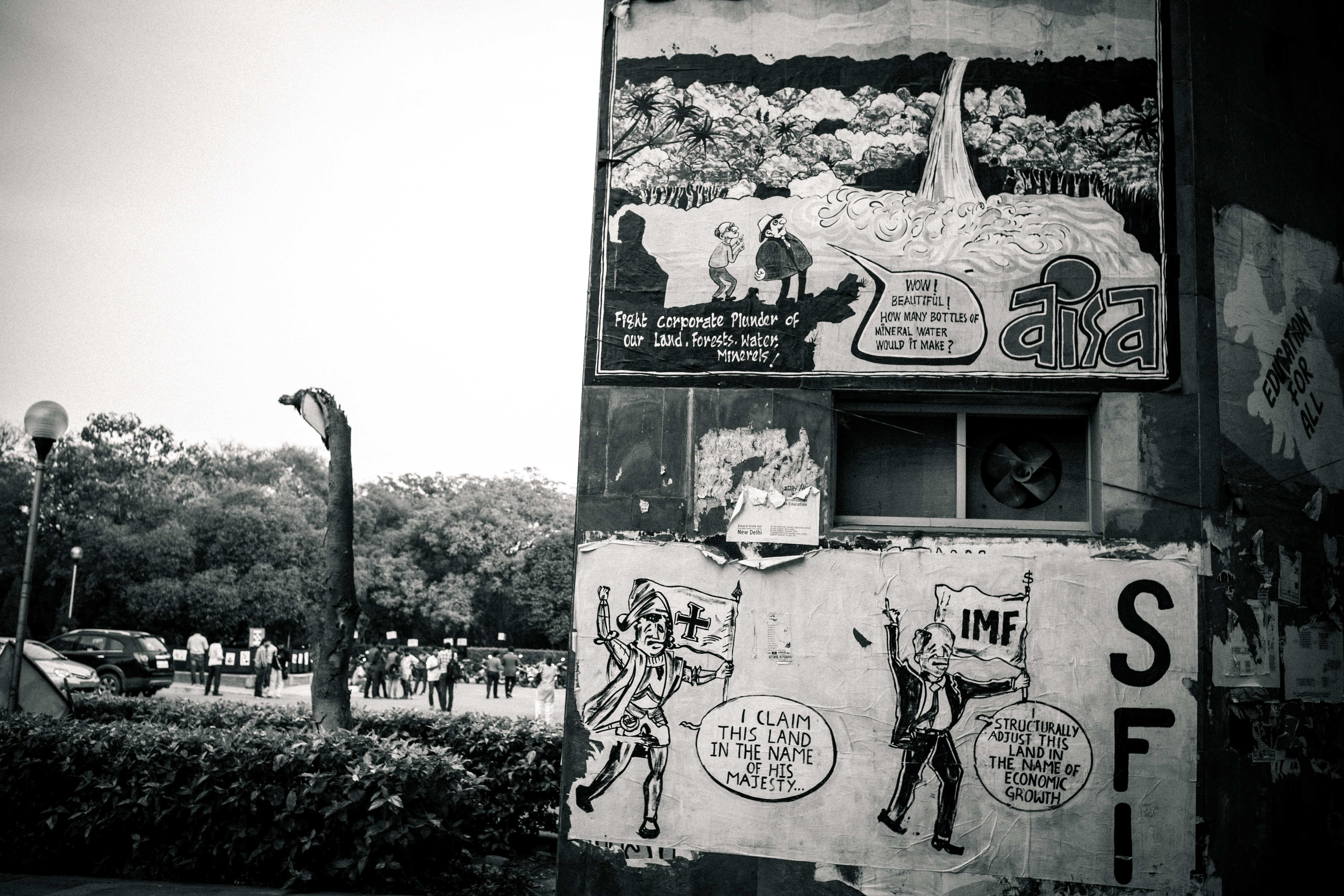 It all began with a bunch of slogans. A ‘shout in the street’ ceases to be apolitical when faced with forceful condemnation. In the case of the Jawaharlal Nehru University (JNU) in New Delhi, this forceful condemnation was executed by the state authorities and whetted through a vicious social media campaign. The University, was left to defend itself against the antagonized masses. A struggle to defend its physical space, its culture of discussion, its belief in the importance of a diversity of opinions and everything else that goes into making JNU, metaphorically speaking, a graffiti on the wall. Like graffiti, ‘JNU Culture’ has an anonymous creator, a largely undocumented process of creation, and yet it exists, clear enough to prick on a deep seated conscience.

There is no clear method of indoctrination into this culture, either; it does not standardize an exercise regime, dietary practice, clothing or even a particular ideology. What it does is to constantly urge its community to debunk homogeneity and uniformisation and in its stead, seek heterogeneity and probe the multiplicity of realities.

A state crackdown on this space for expressing and understanding multiple realities was therefore seen as a direct assault on University spaces, the indictment taken personally by believers of this community. I saw my campus transform into a non-violent battlefield. Little gadflies taking up the exhausting yet pleasurable task of engaging with the social media agora. A display of solidarity that cut across the ever fragmenting Left groups and politically inactive members like me, taking to the streets, sloganeering, arriving at our metamorphosis.

Each statement of solidarity from universities within or outside India working as ‘reinforcement’ to fight the high-handedness of state authorities. The teachers proving to be strong pillars to save the foundation from untoward damage and a revisit for all to the basic political concepts, now being loosely thrown around, exposed to anyone’s dogma.

With the grand return of the Student Union president to campus, JNU is no longer on the defensive. It has managed to come out of this fire unscathed, awaiting the return of its other two sathis. JNU now has the opportunity to translate this euphoria, the spontaneous solidarities, into a structured movement with specific and consistent demands that captures the rhetoric of its slogans.

A blanket movement against fascism or a call for ‘azadi’ restricted to a flurry of social ills and craftily sanitized of any substantial discussion on the political root of the word, might be enough to capture and hold on to the public imagination for a while, but might not be sufficient to channel the struggle towards any particular consequence. It remains to be seen whether the ‘spring’ manages to blossom selectively or does so unequivocally. But, without a structure and particular agenda the JNU ‘spring’ runs the danger of being remembered as a bunch of slogans co-opted and raised in its primetime.

The author is a PhD student at the Centre for Political Studies, Jawaharlal Nehru University, New Delhi.