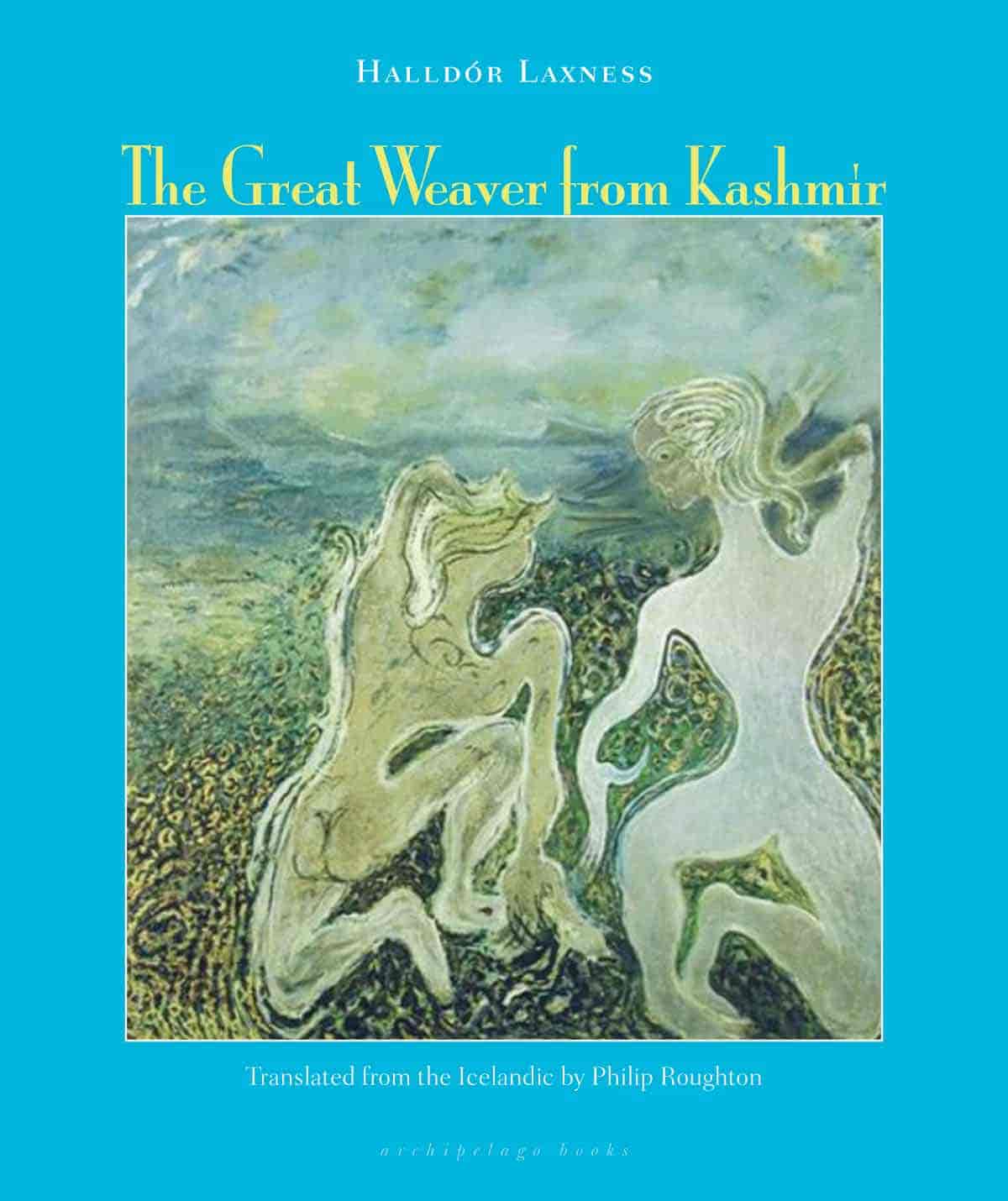 While surfing the net I stumbled upon the title of a book “The Great Weaver from Kashmir” by Halldor Laxness. A sheer curiosity, a result of sighting Kashmir in the title of a book that too by an author who was a Noble laureate induced me to place an on-line order for the book which was delivered in good time. Having completed the reading of the 436 pages of this immensely readable novel which is part biography and part  criticism of various thought systems studied by the author in the prime of his youth, an attempt shall be made to understand the value and merit of this important book. The book was completed in 1927 when Halldor was only 25 years old. Before embarking on my mission of sharing with my readers my impressions about this work, it would be in place to run through the authors life, as it unfolded in the course of almost a century, as our author lived a very long life of 96 years.

Halldór Kiljan Laxness was born in 1902 in Reykjavik capital of Iceland, but spent his youth in the country. From the age of seventeen on, he travelled and lived abroad, chiefly on the European continent. Expressionism and other modern currents in Germany and France influenced him. In the mid-twenties he was converted to Catholicism; his spiritual experiences are reflected in several books of an autobiographical nature, chiefly Undir Helgahnúk (Under the Holy Mountain), 1924. In 1927, he published his first important novel, Vefarinn mikli frá Kasmír (The Great Weaver from Kashmir). Laxness’s religious period did not last long; during a visit to America he became attracted to socialism. Alþydubókin (The Book of the People), 1929, is evidence of a change toward a socialist outlook. In 1930, Laxness settled in Iceland.

Laxness’s main achievement consists of three novel cycles written during the thirties, dealing with the people of Iceland. Þú vínviður hreini, 1931, andFuglinn í fjörunni, 1932, (both translated as Salka Valka), tell the story of a poor fisher girl;Sjálfstætt fólk (Independent People), 1934-35, treats the fortunes of small farmers, whereas the tetralogy Ljós heimsins (The Light of the World), 1937-40, has as its hero an Icelandic folk poet. Laxness’s later works are frequently historical and influenced by the saga tradition: Íslandsklukkan (The Bell of Iceland), 1943-46, Gerpla (The Happy Warriors), 1952, and Paradísarheimt (Paradise Reclaimed), 1960. Laxness is also the author of the topical and sharply polemical Atómstöðin (The Atom Station) 1948.

Laxness was a prolific writer and continued to write in to his eighties, his last book appearing in 1987. His collection includes scores of novels, few volumes of poetry, essays and newspaper columns. He traveled through out Europe and America but finally settled down in his own country of birth, Iceland. As per his own admission he had been brought up in an environment where morals were considered as virtues and keeping the Lord’s creation away from any harm, greatest and noblest of acts. This grand mother’s early sermonizing seems to have made an indelible mark on laxness and this comes out again and again in his works. His espousing the socialist and even communist cause can be traced to these firm roots in his personality.

“I spent my entire childhood in an environment in which the mighty of the earth had no place outside story books and dreams. Love of, and respect for, the humble routine of everyday life and its creatures was the only moral commandment which carried conviction when I was a child.” (From Laxness’s Noble speech)

The Great Weaver from Kashmir is the story of a young Icelandic poet who in his adolescent idealism decides to conquer the world, not by the might of a sword but by the power of a pen. He in his impetuousness feels and believes that he possesses the greatest ever intellect as a poet on this planet and so he owes it to the mankind  on the ground  and God in the heavens to compose fifty poems of the most perfect form and substance fit to be the offering to the God and thus the poet attains a perfection hitherto unknown. So he sets off from his native land to become the most perfect person on the face of the earth, abandoning in the process not only his home, his hearth, his family but also his childhood friend and companion, the love for whom he does not accept and acknowledge till the closing moments of his narrative. Why was it necessary for him to undertake the journey for a task which he could accomplish in his own land; to compose fifty poems, and why was it necessary to disown his love, for which we come to know ,later on in the story that he lived all his arduous and not so pleasant a life. The poet in search of perfection not only as a poet but also as a human being is torn between the angel and the devil. This shifting and shuffling goes on and in one breath he is in full control of his carnal and base self and in the next movement he is singing hymns to devil, glorifying and deifying him in all seriousness. The Great Weaver, the poet himself as we learn in due course is in search of a philosophy that would satisfy the intellect of a modern man.The book has been written in the years following the first world war and therefore seeks answers to questions related to conflicts and wars. The option or the choice offered by Catholicism, an escapist and easy route is hard to ignore and our poet with all conviction dons the mettle of a monk but alas here too his longing for devils ranch, while in angels garden, removes him away in search of his lost paradise. All his professing and spiritualizing does not stop him from falling when the real test comes. This in fact is the high point in the whole saga of intellectual acrobatics. Rationalising the irrational is a special attribute of intelligent people and the hero of The Great Weaver justifies this to the hilt. He is never steadfast in his resolutions and breaks every vow that he professes.

Halldor examines many creeds and convents while searching for some way of life ,some doctrine of conduct but discards all one after another. He goes in to the ascetics of catholic faith with trail blazing lucidity glorifying it as the last and the only answer to man’s problems, faces the rigors  of a hard and regimented frugal existence and doesn’t give up when giving up could be justified but suddenly comes out of the seminary and undertakes a journey back to his own long abandoned city, his long forgotten home and his long separated family. This naturally brings him face to face with the girl whom he had in a fit of seeking glory away from native shores abandoned. Again true to his back and forth oscillations he neither gives up nor owns the girl who is by now a married woman.

The Great Weaver testifies to the vast exposure of the author to different philosophies and thought systems scattered over cultures far and wide .He does make references to Vedas, Geeta and other Hindu sources as well as to zorashtra and Tao but albeit a brief scene in a pleasure house in Cairo where the revelery is called off when moazzin calls for prayers he seems to have been totally ignorant of Islamic sources of philosophy and thought.

The Great Weaver is for a while swayed by the socialist doctrine but again discards it as his Catholism.

An interesting question remains unanswered, why Kashmir? What is the significance of the title to the book? Why is it named, The Great Weaver from Kashmir? Although there are no direct answers to this, Halldor does refer to the valley at three or four places and it becomes clear that the hero of the novel Steinn Ellithi is the Great Weaver from Kashmir. The relevant lines go like this;

I have vowed to leave no further room in my soul for anything other than the celebration of the spiritual beauty of creation. No soulless wish or physical longing, No fleshy desire or pleasure. I am betrothed to the beauty on the visage of things. I intend to travel back and forth through existence like a jubilant monk of the world who beholds the smile of the Holy Mother in everything that exists. My bread and wine will be the glory of God on the face of the creation, the image of the Lord on the Lord’s coins. I am the son of the way in China, the perfect Yogi of India, the Great Weaver from Kashmir, the snake charmer in the Himalayan valleys, the saint of Christ in Rome…

…within a short time he would be gone, swept away and lost somewhere out in the realm of incomprehensibility , gone east to Kashmir to weave silk and satin…

My soul is like Kashmir, the valley of roses;I have  been given the glorious talents, and what’s more, the calling to put them to use…

The rain took the color from his cap, and the drops trickled down his face like streaks of tobacco juice; the Great Weaver from Kashmir…

He spoke the language of a distressed child who has been shaking for a long ,long time from suppressed weeping, the Great Weaver from Kashmir was no longer anything but an empty shell…

The Great Weaver from Kashmir squatted here on his knees, suppressing sobs, his face in his hands, fearful that even Almighty God would not be able to wipe away such crimes…

It appears that the hero of the novel Steinn takes for himself the title Great Weaver of Kashmir as a mark of perfection. At that point of time Steinn’s only purpose is to become the most perfect human on the face of the world. What other than the Great Weaver from Kashmir would signify perfection. Halldor would have seen the exquisite Cashmere in the wardrobes of Iceland nobles and been influenced by their matchless perfection. Only the Master weavers could have woven such intricate designs as would be visible on these Cashmeres brought from distant Kashmir to Europe. An alternate explanation would be that the author had during his extensive studies in oriental (India) lore come across the story of the greatest Rishi of Kashmir, for it is quite interesting to know that Nund Rishi did spent time on a weavers loom during his great spiritual journey. Was this Rishism at the back of his mind when he chose the title of the novel. No one can say for sure but the fact remains that this novel does celebrate the idea that we know as Kashmir.