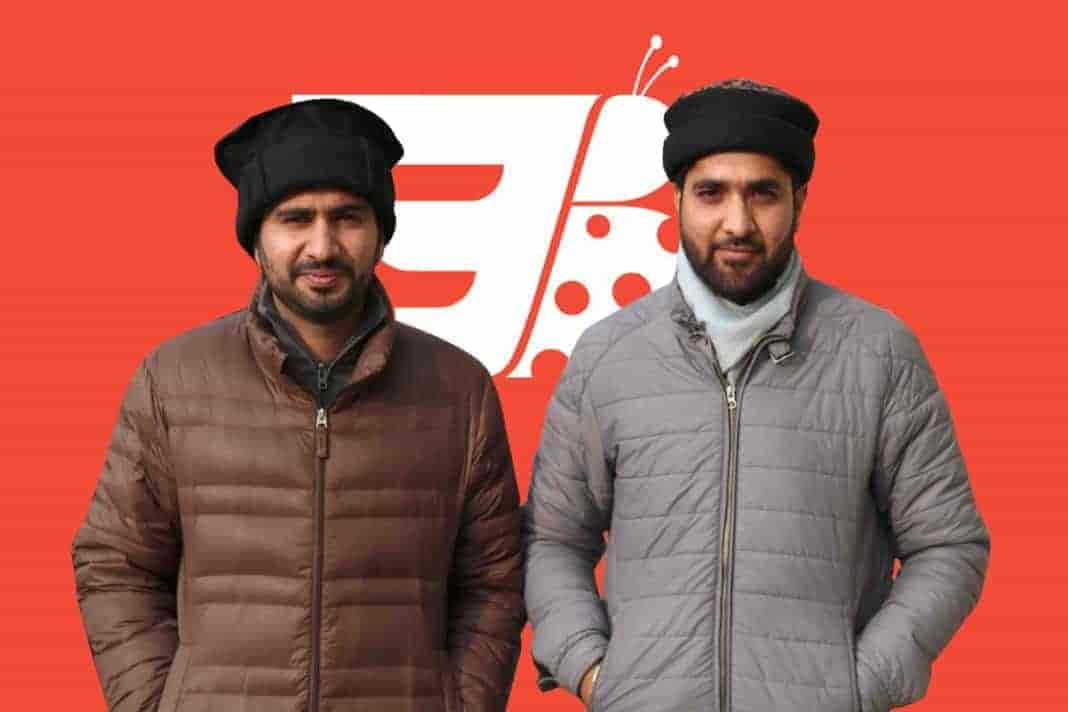 Abid Rashid (left) and Sami Ullah (right) at the FastBeetle office in Srinagar.
Photograph by Vikar Syed for The Kashmir Walla

After two months of research, two Kashmiri youth came up with a plan to start a logistics company (e-commerce) to provide a platform for those who were facing difficulties to deliver products to their customers.

After quitting his job, Sami Ullah, along with his friend, Abid Rashid, who is a Chief Technology Officer at a financial technology company, joined together to start Fastbeetle.

Both residents of downtown Srinagar – Mr. Ullah and Mr. Rashid, 27-year-olds, gave birth to their dream business, becoming partners in the venture. After Mr. Ullah completed his MBA, he worked at an e-commerce company while Mr. Rashid, who has MBA and B.tech, was developing software and helping others to build other technology-based ventures.

As the time passed, Mr. Ullah lost his interests of giving his efforts for the job. He was in search to lay his hard work at a place where he could pound his identity. Though there is a huge number of logistical companies in the Valley, it is the first logistical company in the entire Valley that provides end-to-end service to the entrepreneurs, specifically women.

“As internet bloomed throughout the globe, people start taking advantages from it, so did the valley. Many young entrepreneurs, mostly women started opening online shopping pages on Facebook and Instagram,” says Mr. Rashid, with Mr. Ullah sitting next to him.

Internet slowly became a prominent platform for businesspersons to sell their products online. But, as per both of them, many of those businesses were facing difficulties in delivering the products to the customers, specifically the women entrepreneurs.

So, the FastBeetle came up with a solution.

Getting excited to talk about the idea, Mr. Ullah said, “We contacted many online entrepreneurs, most of them were looking for a company that could maximize the proficiency. We went to solve it.”

At the company, Mr. Rashid runs the technology department while Mr. Ullah is an operational expert. The company has now developed a software that handles the needs of their business in a precise manner.

“We tried to form a platform that can provide delivery of the product to the customer within a day,” adds Mr. Ullah. “This was the reason we decided to name our company as Fastbeetle. Our aim to open this platform is not only to generate profit, but we believe the development should be parallel. If they (all online business units) grow, we grow.”

Early hard work was done by both

The company took the roads on 1 September 2018. Both initially worked as delivery boys themselves. “We thought, we should do field work ourselves,” says Mr. Rashid. “It is hard work that makes one feel the real essence of success.”

The business was started with a moderate capital saved from their respective jobs and they worked on a minimum profit basis. Today, the business is efficient and has delivered around 3000 products within 96 days.

Talking proud in number games, Mr. Ullah said proudly, “I never aimed to sit at one place and wish for growth, I’m not considering myself as an owner of the company. I always see myself as a delivery boy.”

Fastbeetle has received good response from the market within a short period of time and has been able to generate jobs in the market for the youth. “We have hired five boys who are working on salary plus commission basis,” he adds. “Each boy earns a monthly salary of rupees 8000, summing their monthly earning rupees 10500 ($148).”

How unique Fastbeetle is?

Apart from their fastest delivery within 12-hours, they claim to provide end-to-end service to the clients. Earlier, the clients had to maintain ledgers to note down the orders and details of the customers, the company claims that they have solved this issue by providing a good hand-on software.

“Usually customers are very much concerned about the time it takes to receive any product ordered from the seller. We are the first to maintain the adequacy,” they add.

The company has developed the software based on the requirements of the clients. “They can now easily track the product detail and accounts of the customers,” says Mr. Ullah. “Our service has built trust in our clients that push them to go for (COD) cash on delivery through us.”

As per Fastbeetle, other e-commerce companies do not pick products from the client without packing, they sought to resolve this issue as well. “We provide them free packing service,” said Mr. Rashid scrolling through the backend of his website.

In the coming months, the duo plans to replicate the model in other cities and districts with the aim to generate more employment opportunities for the youth. “Kashmir has fewer job opportunities compared to other states,” says Mr. Rashid. “To fight against this, youth are in search to craft new methods of earning to overcome this problem. Our organization can add little to minimize the issue.”