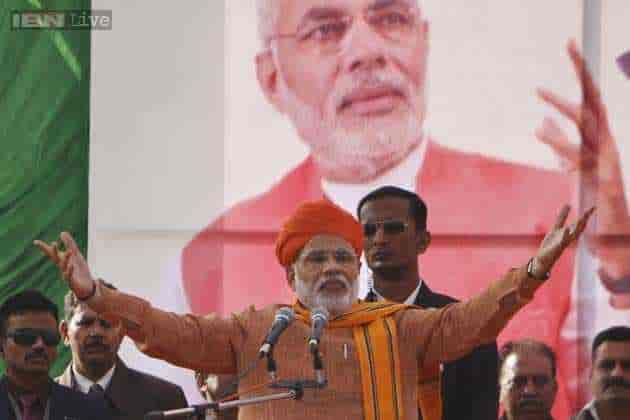 “You may write me down in history
with your bitter twisted lies.
You may trod me in the very dirt, but still like dust, I’ll rise.” – Maya Angelou

There has been a lot of debate in recent times on the article 370 of the Indian constitution. The Prime Ministerial candidate of BJP, Narendra Modi, was seen calling for its complete revocation and redress from the state of Jammu and Kashmir during his recent Jammu rally – Lalkar. He argued that this article stands in between the complete integration of the state of Jammu and Kashmir with the Union of India and for a better part of his rally he became a feminist protagonist declaring that the article is deeply unfair for the women of the state if they were to marry a non-state subject. Modi further expressed his distaste toward the article stating that the people of the state feel a sense of alienation because of the provisions which grant it a special status as compared to the other states in India. On the other hand, the majority of the people of the state seem to be skeptical of their future if the article was scrapped off. The situations lead to the chief minister of the state, Omar Abdullah challenging Modi for a debate on the article.

In the midst of this onslaught toward the abrogation of this article, it is important to remember the situations which led to the formulation of this article. When India and Pakistan got their independence on 15 and 14 August, 1947, respectively, the Princely State of Jammu and Kashmir under the rule of Maharaja Hari Singh chose not to integrate with any of the two, unlike the other 565 princely states. This had mainly to do with the majority of the population of the state being Muslims and wanting to go with Pakistan while the rulers being Hindus. The Maharaja feared reprisal at home if he was to integrate with the Union of India, a Hindu majority.  This would scallop his already dent image as a ruler. The tales of atrocities during the Dogra rule are told and re-told to this day. Fearing a major revolt from his people, Maharaja, a Dogra ruler, turned down the offer of integration with India. Thus, Jammu and Kashmir became an independent state.

The independence of the state, however, lasted briefly, as it had become a “sore in the eye” of the newly independent countries, Pakistan and India, which were on the prowl for such situations to arise in the state that would give them an ostensible reason for an intervention in the state and its take-over. At that time, there had been atrocities committed upon Muslims by the forces of Maharaja in Poonch region. Pakistan, on October 6, 1947, exploited these events as an excuse and unofficially sent tribal fighters called “Qabaeyl” to Kashmir as their saviors. There have been tales of their bravery as well as monstrosity been told by our elders and it is popular in Kashmir that the “Qabaeylis” had reached an area in Srinagar called “Shalteng” on their way toward Srinagar Airfield after which they were misled in-between by a person whom they later nailed to a tree.

In the meantime, Maharaja under such pressured situations solicited military help from India. However, sensing an opportunity, India had kept delaying their help so as to push Maharaja into acceding with India. Mehr Chand Mahajan, the then Prime Minister of Jammu and Kashmir, had been sent by Maharaja to Delhi in order to negotiate terms with the Indian representatives, particularly, V. P. Menon, who was handling diplomacy of integration of Princely States and was representing Indian Union under Sardar Vallabhbhai Patel. From here onward there have been a number of controversies regarding the deal that was struck and the manner in which it materialized. According to the mainstream Indian narrative, Maharaja in a letter directed to Lord Mountbatten, the then Governor General of India, on 26 October 1947, solicited military help from India in exchange of a temporary accession with the Union of India and signed the “Instrument of Accession.” This was followed by the acknowledgement from Mountbatten and eventual landing of Indian military on the soil of Kashmir by the morning of 27 October 1947.

There have been huge controversies regarding the whole Indian narrative to the extent that Alistair Lamb in his book “The Myth of Indian Claim to Jammu and Kashmir- A Reappraisal” states that there was almost no possibility of the signature on the Instrument of Accession to have taken place before the overt Indian intervention in Kashmir.  He reasons his claims by stating:

“The earliest possible time and date for their signature would have to be the afternoon of 27 October 1947. During 26 October 1947 the Maharajah of Jammu and Kashmir was travelling by road from Srinagar to Jammu. His Prime Minister, M. C. Mahajan, who was negotiating with the Government of India, and the senior Indian official concerned in State matters, V.P. Menon, were still in New Delhi where they remained overnight, and where their presence was noted by many observers. There was no communication of any sort between New Delhi and the traveling Maharajah. Menon and Mahajan set out by air from New Delhi to Jammu at about 10.00 a.m. on 27 October, and the Maharajah learned from them for the first time the result of his Prime Minister’s negotiations in New Delhi in the early afternoon of that day.”

The popular narrative in the state is that the Maharaja, after huge surge in uprisings against his atrocities, ran away to seek refuge in India and hence the state was still independent when the Indian troops landed in Kashmir and started their overt involvement.

With their ruler on run to India, there was chaos in the situation. India feared of a big reprisal if it pushed for the complete integration of the state which allegedly acceded against the wishes of its people and in the circumstances that still remain gloomy.  Hence, Sheikh Abdullah, the then interim Prime Minister of the state along with Mirza Afzal Beg and Maulana Masoodi pushed for and negotiated with Jawaharlal Nehru and Gopalaswami Ayyangar, who was a former Diwan to the Maharaja, on the formulation of Article 370. The substance of the article granted a degree of autonomy to the state of Jammu and Kashmir under the Indian Constitution’s  Part XXI.

The article meant that the Indian Parliament had a limited or restricted jurisdiction in the state and hence, excluding the matters of Defence, Communication, Finance and Foreign Affairs, the laws passed by the Parliament of India do not get implied on the State unless passed by its own government. It gave the people of the state right to form their own Constituent Assembly which was set up on 26 January 1957 and own constitution was drafted and a flag was chosen to represent the State. As per this article, the Part IV and IVA of the Indian constitution which correspond to Directive Principles of State policy and Fundamental duties, respectively, do not apply to the state. However, the laws ensuring fundamental rights and right to property are applicable to the State. Article 370 inhibits any non-resident of Jammu and Kashmir or the non-state subject to purchase any land or property in the state and hence such rights are enjoyed only by the permanent residents (PRs). The article, however, was thought to curtail the status of PR to women who married a non-state subject or a non-PR. However, in 2004, the High Court of Jammu and Kashmir, in case Sheela Sawney Vs State of J&K, announced that there was no law existing that dealt with the PR status of women who married a non-PR and hence, because of lack of legal basis declared the PR status is not lost. Having said that, I believe Narendra Modi did not update himself before shedding tears for the women of Jammu and Kashmir which have or were to marry a non-PR.

There have been attempts and demands to abrogate article 370 from various Indian politicians and reformers who relentlessly want the state to be completely integrated into India against the wishes and aspirations of its people. The degree of autonomy ensued by this article when it was implemented has changed to the extent that the Sadar-i-Riyasat and Prime Ministerial positions (till 1965) have been replaced by Governor and Chief Minister, respectively. There have been many other Presidential orders which have lead to the gradual erosion of various clauses in the article. Sheikh Abdullah knew that India will try to erode this article for the complete integration of J&K with India and in 1953 he pressed hard for an “iron clad and complete autonomy of the State” which made him a popular figure among the people, however, orchestrated by Nehru, India soon dismissed his government and jailed him for eleven consecutive years. After his release, Abdullah ensured that the state be related to Indian Union only through Article 370 and there be no erosion of the same when he signed 1974 Indira-Shiekh accord.

The revocation of article 370, which provides a political space to the people of Kashmir, is and would be seen as an imperialistic tactic. History teaches us that the sentiments of Independence arise when the political space of people is narrowed to a mere stint. Modi’s foray toward the repeal of article 370 can have serious repercussions and could prove counter-productive, if he becomes the next Prime Minster of India and decides to scrap this article. However, article 370 provides itself immunity from revocation unless and until its revocation is accepted by the Jammu and Kashmir’s legislature and its Constituent Assembly. Now that the Constituent Assembly of the state no longer exists, it is a big question for Modi of how to implement the amendment of article 370.