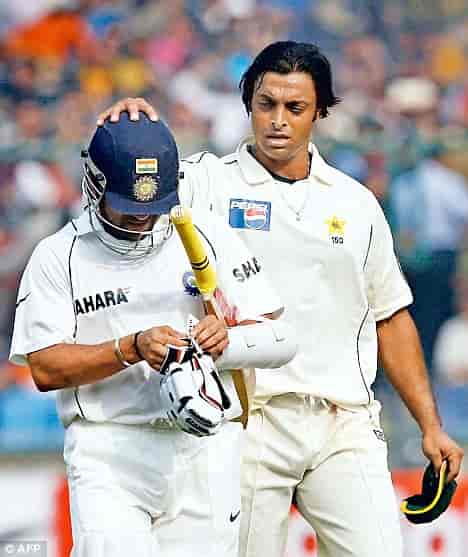 Cricket has witnessed some of the fiercest rivalries, one among them being between the world’s fastest bowler ever Shoaib Akhtar and one of the greatest batsmen the game has witnessed, Sachin Tendulkar.

Whenever the two arch-rivals India and Pakistan faced each other on the cricket field, fans would always cherish the battle between Akhtar and Tendulkar.

There are many stories that have been doing rounds on the rivalry, the latest being the one shared by Akhtar’s former teammate Mohammad Asif.

While speaking about the third Test of the series in Karachi, where Indian left-arm paceman Irfan Pathan took a hat-trick in the first innings, Asif recalled how Pakistan snatched victory from the jaws of defeat.

“When the match started, Irfan claimed a hat-trick in the first over [dismissing Salman Butt, stand-in Pakistan skipper Younis Khan and Mohammad Yousuf]. Our morale was down before Kamran Akmal scored a sensational century [113] to rescue us as we reached 245,” said Asif during an interview. “The Indians were playing on the back foot and we didn’t allow them to score more than 238 in their first innings. Actually we snatched victory from the jaws of defeat.”

The right-armer, who captured 4-78 in India’s first innings before adding three more wickets in the second innings, also opened up on Tendulkar’s battle against Shoaib, which saw the legendary right-handed batsman close his eyes while facing bouncers from the fiery Rawalpindi Express.

“When we began bowling, Shoaib bowled at express pace in that match. I was fielding at square leg near the umpire and saw that Tendulkar closed his eyes while facing a couple of bouncers,” Asif narrated.

With a slender lead of seven runs, the hosts then amassed 599-7 declared in their second innings — the first seven batsmen all crossing the half-century mark with Faisal Iqbal contributing 139, Yousuf 97 and Abdul Razzaq 90 — and went on to win that Test by 341 runs and the three-match series 1-0.

But later on Asif’s career went sideways after his involvement in the infamous 2010 spot-fixing scandal. After serving a seven-year ban, he returned to first-class cricket but never got a chance to don Pakistan colours again.