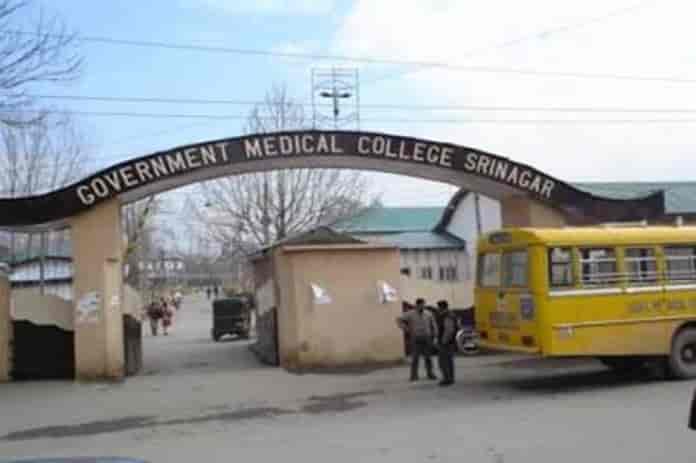 After the Jammu and Kashmir police initiated strict action against the students, who allegedly celebrated the victory of Pakistan over India in a T20 cricket match on Sunday, students say it is better to be killed than ruining their careers.

Following the 10 wicket victory by Pakistan over its arch rivals, medical students at the Sher-i-Kashmir Institute of Medical Sciences (SKIMS) Bemina and Government Medical College Srinagar were allegedly seen celebrating the results in videos that went viral on social media.

However, the celebration of the students didn’t last long as police booked them under Unlawful Activities Prevention Act (UAPA) for ‘cheering’ and ‘raising slogans’ in ‘support of Pakistan cricket team’.

Irfan Ahmad (name changed), a student of SKIMS Bemina who is in his final year of MBBS, told The Kashmir Walla, that they were supporting the both teams in the match.

“It was not a selective support for the Pakistan team. We were supporting India as well. When Virat Kohli smashed a six we celebrated that too. We were celebrating the performance of the players,” he said.

“We are facing mental distress after we came to know about UAPA slapped on us. We are students and have nothing to do with politics and are only concerned about our studies. We had never thought that we would face such a situation,” he said.

Soon after the match ended, two separate videos went viral. One of the videos is said to be from SKIMS Bemina and another from Government Medical College (GMC) Srinagar wherein students could be seen celebrating and sloganeering.

A student of the college said that everybody was watching  the match including their non muslims colleagues, attendants of the patients and staffers, “but we know that  [administration] would not accept this reality”.

“It was not the first time we enjoyed a cricket match. Last year when it was a cricket match between New Zealand and India we celebrated it in the same way,” he said.

Amid fear of police action Irfan said that it could  damage their career. “We have given our blood and sweat for the past five years to reach this stage. We are at no fault,” he said.

“I would prefer to get hanged rather than ruining our career. Beat me, kill me, take me to court, if you want to slit my throat, do it.  I am ready despite the fact that I have not done anything wrong, but do not ruin our career,” the student said.

He said that they have burned midnight oil to pursue their career. “Most of us have hardly been to home. I have been home 3 times only, in five years. We couldn’t  sleep after hearing that the case has been registered [against us]. Many have left for home in the morning, in distress,” he said.

Sources said that the FIR is still open and the accused are yet to be identified but the investigations are on.

The college administration, as per the sources, conducted a meeting on Tuesday as “they have been asked by the police administration to identify” the people who could be seen in the viral videos.

The Kashmir Walla tried to reach out to the Senior Superintendent of Police in Srinagar for comments over the issue but he was not available.

Meanwhile, the police action received a mixed response from people but some politicians in the region took exception. They said such steps will alienate youth of Kashmir further and demanded revocation of the FIRs registered.

Former Chief Minister of Jammu and Kashmir Mehbooba Mufti said that instead of trying to ascertain why educated youth “choose to identify with Pakistan,” the Government of India  resorted to “vindictive” actions. “Such steps will alienate them further,” she said.

While quoting a tweet seeking suspension of students from the colleges, Jammu and Kashmir Peoples Conference Chief Sajad Lone said, “I strongly disagree. If you think that they are not patriotic enough because they cheered for another team – you should have the courage and the belief to wean them back if you think they have gone patriotically astray. Punitive actions won’t help. Have not helped in the past either (sic).”

The UAPA has not been invoked for the first time in Kashmir on the action that involved cricket. In September 2020, nine cricketers were arrested under UAPA for wearing jerseys in memory of killed militants in Shopian district.

Syed Tajamul Imran, the brother of Syed Ruban — a militant affiliated with Al-Badr and was killed in 2019 in a gunfight with the government forces — had organised a match “loving memory of his brother” and distributed cricket jerseys carrying pictures of his militant brother.

After distributing the jersey, on 6 August, Tajamul had said, “In memory of my brother Shaheed Syed Ruban, I distributed some 70 cricket uniforms among the young talented and aspiring cricketer of Shopian district to fulfil the dreams of my brother, as he was also a brilliant cricket player of the district.”

However, the then senior superintendent of police (Shopian), Amritpal Singh had told The Kashmir Walla, “they have glorified militancy in the name of his [Syed Tajamul] brother and have also spoken about militancy. They wore jerseys and also went to his graveyard.”

Legal experts believe that filing an FIR for mere celebration of someone’s victory is an abuse of law. “There is no law that prevents you from celebrating the victory of any country in sports. If there is evidence that anti-India slogans were raised then FIR is maintainable.,” said Shafqat Nazir, a lawyer in Srinagar.

On raising slogans in support of Pakistan, Nazir said, “it is yet to be decided by the law as several petitions in this regard are pending in different courts of law.”

“ There have been no findings on it. It is still about intentions, if you are saying ‘Pakistan Zindabad’  in context of cricket only or you want to hurt the sentiments of other people by saying so, so it is tricky, it is not settled yet,” Shafqat said.

Similarly in Jammu and Kashmir’s Samba, six people have been detained by police after a video purportedly showing objectionable slogans being raised by a group of people, following the T20 World Cup match between India and Pakistan, went viral on social media, officials said on Tuesday.

Previous articleRajnath refers to Masrat Alam’s arrest, says ‘no one will be allowed to raise pro-Pakistan slogans’
Next articleKashmir Urdu Headlines | 26 October 2021