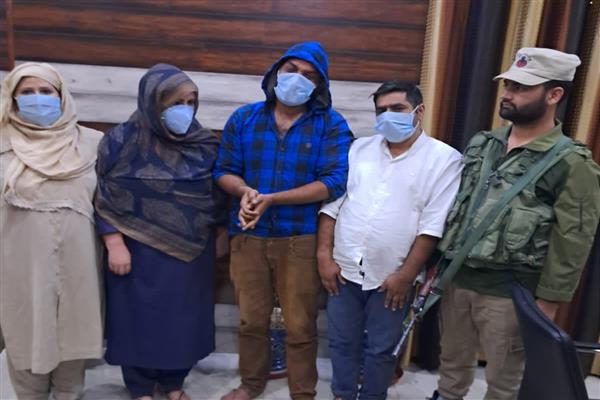 Jammu and Kashmir Police has busted a “sextortion” racket with the arrest of three people, including a husband and wife team, who allegedly trapped men of influence and extracted nearly 40 lakh rupees from them over six months, Press Trust of India (PTI) reported quoting officials.

The unravelling began earlier this week with a senior government official walking up to the police to complain he had been duped of 8 lakh rupees and was being blackmailed, officials said.

The three suspects, Shaista Bashir and her husband Aijaz Ahmed Ganie and their friend Jahangir Ahmed Dar were arrested on Wednesday on charges of running a full-fledged ‘sextortion’ racket.

The government official told police he had received a call on his mobile from a woman a few days ago requesting him for a favour. She asked him to go to her home to discuss the matter. He went and was led into the bedroom. Within minutes, the husband and another man barged in and started shooting a video, a police official said, giving details from the FIR.

The husband also accused the official of having an affair with his wife, as per the report.

According to police, the complainant somehow managed to leave the couple’s house only to receive a telephone call a few days later asking for money. If the money was not paid, the voice at the other end said, the incriminating video would be shared with his family and also uploaded on social media platforms.

As per the report, the case reached Senior Superintendent of Police (Srinagar) Rakesh Balwal who immediately ordered a discreet enquiry to establish the claims of the complainant as well as antecedents of the alleged blackmailers.

The ‘gang’, he said, would collect information about influential men and had earned around 40 lakh rupees in the last six months by blackmailing.

“Nearly seven to eight such individuals have come to our notice and we are working on this,” Balwal told PTI.

“I am sure there would be many more men like them who don’t want to come into ish to come out because of the social stigma. I assure them that their identity would be kept discreet,” he said.