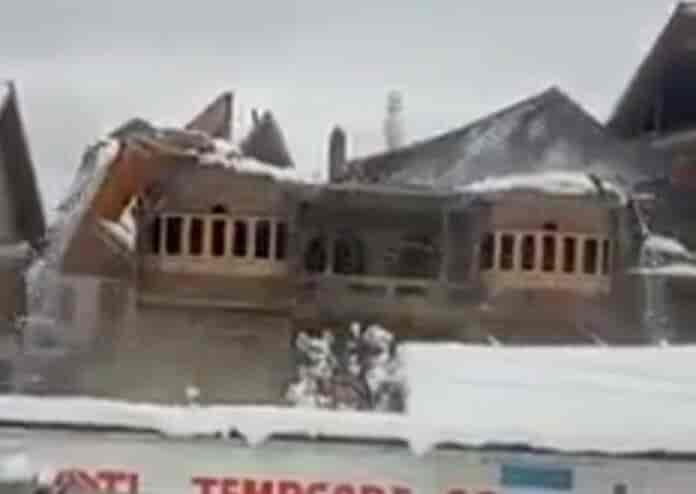 Uri: Dozens of structures including houses and shops were damaged due to heavy snowfall in Kashmir valley, reports officials said on Wednesday.

At least twenty seven residential houses suffered partially or substantial damage in Uri and Boniyar villages of north Kashmir’s Baramulla district, they said. The houses include four in Nambla, as many in Uri, two in Dani Seydan, five in Jabla, three in Garkote, as many in Dardkote and Udoosa besides one each in Sultandaki, Mayan Boniyar, Bijhama Boniyar.

Also, reports said a structure of Budoo Poultry farm and two non-residential structures were also damaged in Garkote Uri due to heavy snowfall.

A senior official from administration told GNS that 30 structures have been damaged as per initial reports. “We are collecting more details” the officer said, adding, “There has been no loss of life or injury reported so far.”

Also, house of one Abdul Gaffar Sheikh at Nalabal Nowshera Srinager was partially damaged along with residential house of one Ghulam Nabi sheik at Gagribal Srinagar near Hill Top Hotel. Another residential house, belonging to one of Ghulam Mohammad Guroo at Boatman Colony Bemina suffered damage due to heavy snowfall. Also rooftop of a house collapsed at Tengpora Batamaloo.

Meanwhile in Central Kashmir’s Ganderbal district, a residential house of Ghulam Ahmad was also damaged due to heavy snowfall.

In Magraypora Khanda, rooftop of the house of Master Ghulam Mohammad collapsed. Also there were reports about several shops and cowsheds suffering damage due to the snowfall. (GNS)