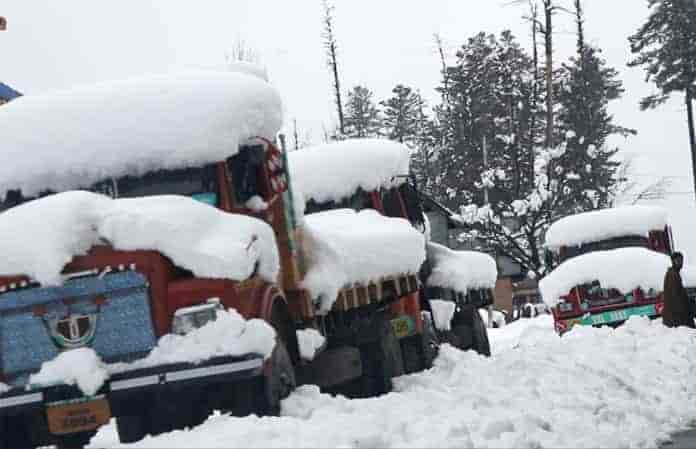 The season’s first snowfall in valley on Saturday has left most areas of  Kashmir without electricity for a period of more than 24 hours, raising people’s anger over the poor management of facilities in the valley.

The change in weather triggered troubles for the locals as many areas of the valley including Srinagar city from Saturday continue to remain without electricity.

Reports said that “heavy” snowfall in the Valley has resulted in trees with thick foliage coming down heavily on electrical lines, damaging most of the 33KV line.

As per reports, in Srinagar the two main trunk lines including Centaur and TRC coming from Cheshmashahi have come down after huge trees fell on them. The Karan Nagar and BB Shah lines are also damaged under trees at various places but the restoration process is underway.

The unexpected snowfall led to frequent faults in the electrical system affecting power supply in most rural areas and civil line areas of the city.

However, the authorities are using all their efforts, ‘men and machinery’ to resume the power supply in major areas of the valley.

The snowfall earlier resulted in traffic jams in several areas of the city causing an inconvenience to the travelers, blocked drains which raised the water level on roads.

“I am puzzled to see the poor management by the authorities here, few inches of snow dragged whole valley into darkness. Drainages were blocked, roads filled with water. We are the all-time suffers by the poor mechanism. Decades have passed, but our problems remains same,” said Tasaduq Ahmad, a resident of Magermal Bagh Srinagar.

The Governor of Jammu and Kashmir Satya Pal Malik had earlier said that power supply in Kashmir Valley will be restored soon, however most parts of the valley continue to reel under darkness.

“I talked to power secretary. They are on the job. Soon it will be restored. At some places, trees have fallen on lines but that is being taken care of,” Governor was quoted as saying to the media.